OFF THE CLOCK is a weekly feature providing you with an inside look at the people who make Derry tick – from the Assessor's office to the Water Department, each week you'll get a glimpse of who they are and what they do when they're not assessing your property tax or testing your water quality.
*Editor's note: Apologies to former Off the Clock subjects. Due to "technical difficulties" the archives are in the process of being restored prior to 8/16/10.
Sorry for any inconvenience. CR

By CAROL ROBIDOUX
Union Leader Correspondent
DERRY – Marlene Bishop's interest in animal control can be traced back to her earliest childhood years, when she recalls organizing a group of household ants underneath her bed.
“My mother caught me feeding them, and she asked me what I was doing. I told her I was just playing with my friends. She, of course, gave me a good talking to; then she vacuumed them up,” said Bishop.
On a related note, it's important to understand that her mother, Florence Ouellette, was in all other cases an animal lover as well, and served as town dog catcher before Bishop joined her back in the 1970s in the Animal Control Department. The two worked together for years, until Ouellette retired in 2001.
When not single-handedly responding to suspicious fox sightings, stray dog calls or the seasonal moose on the loose calls in town, Bishop keeps busy at home, controlling her own wild kingdom which includes three corgis – Gremlin, Tilly and Mojo; an Australian shepherd named Abby; two mini horses, Mouse and Mini Me; a black cat named Kitty Girl; a lop-eared rabbit named Miss Rabbit; a flock of McCaws and parolets; and five honey bee hives.
“I'm not really sure why I wanted to start with the bees,” said Bishop, adding some grass clippings to a smoker and then pumping the billows until she is lost in a cloud of smoke. She winds her long hair into a knot on the back of her head and clips it into place, then pulls a bee jacked over her head, making sure every crevice is tightly sealed. She pulls on her bee gloves and heads toward the hives.
“Had a bee stuck right here, between my chin and the jacket – got stung so many times my chin was misshapen for a while,” said Bishop. Three years in, the stings have lost their sting. “It gets to the point where it's like a mosquito bite.”
She started off with a copy of “Beekeeping for Dummies,” but soon realized everything she always wanted to know about beekeeping might be better learned from local experts. She attended bee school at Pawtuckaway Beekeepers Association in Candia, and picked up her first three hives from Hudson beekeeper Alden Marshall.
“I lost a hive my first year – they starved to death. I learned some things the hard way,” said Bishop, peeling the top off one of the hives and pulling up a screen glued together with honeycomb and dripping with bees. “But this spring I got two more hives, and then one of my hives swarmed, and so now I have five active hives. This one I've taken 21 pounds of honey from so far this season.”
She says she probably was drawn to the hobby after hearing so much about Colony Collapse Disorder in the news. Now, she has a profound understanding of the intricacies of bee behavior and how human behavior contributes to their struggle for survival, through heavy use of lawn chemicals and general disruption of the food chain.
Her expertise on human behavior is an occupational hazard – many of her own pets were “throwaways” – Miss Rabbit had been tossed in a Dumpster, found by an elderly couple taking out their trash. Mouse was a stud horse who was living in an abusive pet-owner relationship.


She believes people generally have lost touch with the reality of our intended relationship with animals. 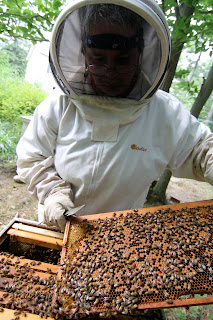 “Farm life gives you a respect for animals – you care for them and, in return, they sustain you. We've lost that. People today in their quest to not be cruel to animals want to 'save' everything. That's not the answer. People who raise animals for food know that,” said Bishop, whose Native American roots twist a little when she thinks too long or hard about how people take nature for granted.
“Native Americans took only what they needed from the earth. There is a respect for nature, something we've forgotten – we're killing the planet,” said Bishop, stopping in her tracks as a garter snake wriggles past her feet. She reaches into the grass and plucks it up with two fingers strategically placed behind its hissing little head.
“Snakes? These guys don't bother me. Not much bothers me – except spiders,” Bishop says, releasing the snake back into the grass as she heads over to see if her houseplants are enjoying the morning sun.
In addition to fauna, Bishop also nurtures an assortment of flora – day lilies, hibiscus, jasmine, aloe, begonias, sage, catnip, grapes, and some fruit trees. Her swiss chard is thriving this season, while her tomatoes have suffered late blight.
A flurry of white butterflies circle the garden while she bends to harvest the thick stalks of chard. Mouse gallops to the fence, perhaps hoping for snack. Kitty Girl darts across the dirt path between Bishop and the corral.
“Don't let it bother you,” says Bishop, gathering the chard into a two-fisted bunch. “She's a black cat, but she's lucky.”

By CAROL ROBIDOUX
Union Leader Correspondent
DERRY – When he's not managing the town's technological interests as IT/GIS manager, Doug Rathburn is working in the field – specifically the soccer field – teaching kids the finer points of soccer.
“When my oldest was old enough to play I got into coaching. They were hungry for coaches – as they always are. But since I had some idea about how to play the game, I figured why not,” said Rathburn.
That was 11 years ago – and he's still coaching kids, currently that includes his youngest, Hunter, who plays for Derry Eagles U10 travel team.
Rathburn came to soccer naturally – he grew up in Germany because his father was a military officer and his mom was a native of Germany.
“Especially when my father was serving in Vietnam, it was just easier for my mother to go home and live with her family then to stay on base, so I have a lot of memories of growing up at my grandmother's house, playing soccer with my cousins,” said Rathburn.
Soccer was to kids in Germany like baseball is to American kids – a pickup game of soccer was just how you passed the time.
Rathburn eventually settled in Derry in time for his freshman year at Pinkerton. He said the story of how his parents found their way from Munich to Derry is another one of those instances of happenstance that ends up directing the course of your life. 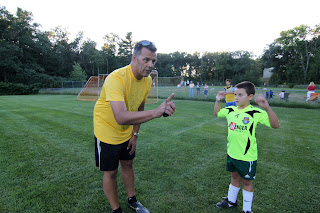 “They were going to Nashua to look at something, and took a cab – Curley's Cab out of Derry. Turns out the cab driver was selling his house in Derry. One thing led to another, and the next thing you know, my parents ended up buying his house,” said Rathburn.
Coaching is just a good fit for Rathburn, who comes at the game from perhaps a more philosophical point of view than the average American coach.
“I think in some ways, American kids come at soccer the same way they regard football – it's a linear thing, and it's all about moving the ball down the field to make a goal. My approach is in trying to teach kids that it's really a game of keep away. You teach the kids to pass the ball and that you don't always have to take it to the net yourself. Sometimes, your best chance to score is the guy standing right next to you on the field,” said Rathburn.
Although he doesn't think soccer will ever be No. 1 here as it is in other countries, Rathburn acknowledges that soccer has come a long way – and is more a part of American culture than ever before. 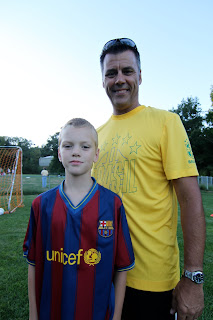 “It's definitely found a following. It's a great sport – it's really a contact sport, a very physical sport. If you watched World Cup soccer you saw how much those guys use their bodies in the course of a game,” said Rathburn.
He raised his hand to coach when his oldest, Even, now 17, was about 6.
“My middle son, Conor, is 12, and so basically after coaching Evan, I would drop down and start again with the younger kids – which is really my favorite place to be,” said Rathburn. “It's so cool to see them come out and learn the basics and progress, from showing up with the shin guards on upside down to learning how to dribble down the field and really do well.”
His youngest, Hunter, is 9. Rathburn coached him for four years and thought maybe this would be the year to take a break and just join the other parents cheering on the sidelines.
“One of the coaches dropped out and they needed another coach. I think now that I'm back into it, I'm in it for the long haul,” said Rathburn. “I thought maybe I could be happy to just watch from the sidelines, but coaching is something I've really come to love.”
He is co-coaching with Antonio Noj, a native of Guatemala who also grew up regarding soccer as the only sport. Together they've been nurturing their team of 20 boys, continuing the spring soccer sessions all through summer and into fall.
“We didn't know if any of the kids would actually show up over the summer, but we told them we'd be at the field every Tuesday and Thursday, and if they wanted to play, just to show up. Some nights we had a dozen kids,” said Rathburn.
He said his wife, Maribeth, is a devoted soccer mom, and enjoys supporting which ever team needs supporting. Although their oldest, Evan, has mostly switched his energy to tennis, the other two boys continue to play for the town of Derry.
“I guess for me the thing about coaching is that I get to see a lot of kids in the upper level who started out with me when they were just learning the game. The fact that they're still playing, still loving the game reinforces that my philosophy works. I feel it's important that kids just learn to love the game when they're young. It gets competitive later on, and that's fine,” Rathburn said. “But if it's not fun for you when you're starting out, you lose that spark.”
AUGUST 23, 2010
FIREFIGHTER MIKE WILLINSKY
Big guy, big heart