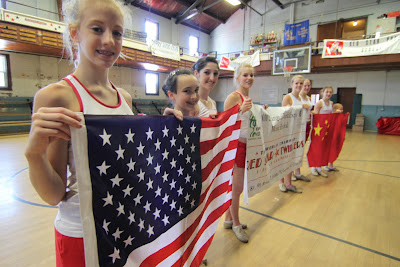 By CAROL ROBIDOUX
Union Leader Correspondent
DERRY – Gina Hutchinson watches her twirlers run through their road show routine. Her face is blank, but the wheels are turning. Her eyes follow every move as the 10 girls take turns spinning on toes, flinging silver batons overhead and catching them effortlessly, in most cases, as they complete a segment of the choreography.
They stand, batons at their sides, waiting for the verdict.
“OK. Do it again. Do it again until you get a no-drop. You won't get a costume on your back until you have a no-drop,” says Hutchinson, matter of fact, peering over the top of her eyeglasses as she leans over the boom box to reset the musical cue.
Undaunted, the girls regroup. Cue music. And one, and two...
Halfway through, Hutchinson stops the music.
“Do you not get the beat? It's so identifiable. Da-DA-da-da-da-DA-da KICK,” says Hutchinson, who starts the music again. Her Red Stars take it in stride, and then some. They feel the urgency, too. Only a week before Shanghai. Only one week to polish their ambitious star-spangled routine.
It's as much about performance anxiety as it is about representing the Red Stars, thereby representing Derry -- and New Hampshire, and the United States of America – showing the People's Republic of China the dazzling skills that have put these twirlers on the world map.
Hutchinson, a retired school teacher, has been at the helm for decades. She's a stickler for getting it right, a perfectionist when it comes to foot position, spin rotations, eye contact, just the right wattage of a winning smile.
In fact, each girl who signed on for the 10-day trip to perform at the Shanghai World Expo Music Festival was required to write a report. It was due yesterday.
“They're all right here,” she says, thumbing through a pile of work, worthy of an honors English class.
“All but one. One of my girls didn't finish, so she spent today out in the hall working on it, and she can't come to rehearsal tonight – or tomorrow, or Thursday – until it's done,” said Hutchinson.
Why, you might be moved to ask, does a baton twirling coach require her troupe of baton twirlers to spend part of their summer vacation researching China and then laboring over a lengthy report. 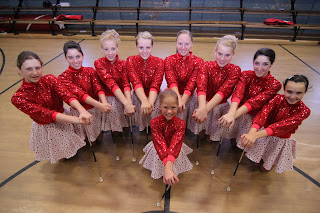 “My goal for every one of these young women is to go to college. A Red Star resume is so far above what the average teenager has to give. They should know more than an average tourist, about China. I want them to know what the guides are talking about, and not appear to be ignorant American tourists,” says Hutchinson. “And yes, the reports do get graded.”
Another reason for the reports is to give everyone something to do on the 16-hour flight to China – the girls and the chaperones will swap reports.
“We will all know so much by the time we land, and every report is based on places we're going while we're there,” Hutchinson said.
This week the girls will also get a crash course in basic Chinese phrases. They will each pack gifts to present to their hosts, including locally made maple syrup and candy, some Old Man of the Mountain keepsake coins, and several travel brochures.
Kaleigh McIver, 17, is looking forward to touring Tiananmen Square.
“We studied the Tiananmen massacre in school, and I'd like to see where it all happened,” said McIver.
Ashley Andrew has been twirling 16 of her 19 years. She's looking forward to the Shanghai Bund, a popular tourist site that features various types of architecture, a blend of the old and the new.
Kathryn Carlson, 16, is looking forward to seeing China's Great Wall, one of the sites where the twirlers will be performing. She is not looking forward to flying across a large body of water to get there.
“I'm kind of nervous about flying across the ocean,” she says.
Not to worry, says Hutchinson, shifting into teacher mode.
“We will be flying what they call the 'great circle' route, we will go up to Greenland first, so we won't be flying directly across the ocean,” Hutchinson said.
It's final fitting day for costumes, made especially for the girls by team seamstress Lucinda Borrone, of Chester. There is a brief debate over whether Allie's jacket is long enough at the waist.
“Let's leave it as it is, until after China. She'll be 10 inches taller in no time. She grows like a weed, this one,” Hutchinson said.
Then she gathers the girls together in their sequin-and-silk spangled outfits, asking three of the girls to spin and twirl. “I just want to see how it looks,” Hutchinson said.
So the three girls stand, fix their eyes on the back wall, smiles set at maximum wattage as they toss their batons and spin three times fast, before catching the twirl-sticks, on cue.
“Fantastic. You look fantastic,” says Hutchinson. “Now, do it one more time, just to make sure.”