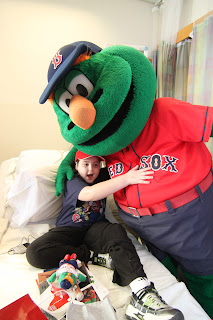 BOSTON -- THERE ARE FEW things in life a hug from a big green monster in a Red Sox shirt can’t fix.
Unfortunately, Thomas Viana’s illness is one of them.
Still, an unexpected visit Wednesday from the rotund home team mascot did bring a smile to the 9-year-old Derry third-grader’s pale face. Tommy was preparing to spend the night at Children’s Hospital for the final of four rounds of drug treatment that doctors hope will ease the chronic seizures and progressive neurological symptoms that have plagued him for nearly two years.

If not, his Rasmussen’s Encephalitis can only be stopped with radical brain surgery.
“They didn’t diagnose him until this November,” said Tommy’s mother, Lynn-Marie Viana, explaining how a brain biopsy confirmed the rare disorder, which features swelling of the brain and uncontrollable seizures that have left him with permanent paralysis in his left arm and leg.
“At one point he was having 120 subclinical seizures a day,” said his mother, who said the typical Rasmussen’s symptoms are compounded by a “movement disorder” that has manifested as a constant twitching, which may or may not be related to the disease.
The surprise visit by Wally the Green Monster was arranged by John Bly, who works at New Hampshire State Hospital with Tommy’s father, Manoel Viana.
“I noticed Manny hadn’t been at work lately, and when I asked around, I found out his son was sick,” said Bly. “Manny’s been going back and forth to Children’s Hospital with him for months. Right now he’s out on Family Medical Leave — he’s run out of vacation and sick time, so he’s not getting paid.”
Bly wanted to do something to help his co-worker, so he’s been in charge of taking up collections at work, so far raising $2,000 for the family. Because of his connections as an assistant baseball coach for Colby-Sawyer College, Bly also managed to pull some strings with the Red Sox organization to get Wally in for a visit.
“I know his son loves the Red Sox, and I thought it might be an exciting experience for him, to kind of take away from the pain he’s going through,” Bly said. “No one should have to suffer like that, but it crushes me to think of a little 9-year-old boy going through something like this.”
On Dec. 15, Tommy’s dad ran out of paid time off. As a state employee, Viana is allowed to apply for supplemental sick leave. However, his application was denied by the Labor Management Committee, which oversees the process of extending a worker’s sick time by using time donated by fellow employees.
Viana said he thinks he may have been turned down because he is not the patient. However, he reapplied and is awaiting a decision, which was supposed to be coming this week.
“We understand that Manny has used up all his own time, and he still has his job. But there are people lined up and waiting to donate some time, so it would be wonderful if that works out,” said Lynn-Marie Viana.
She said despite all they’ve been through, the family has run out of ways to say thank you to her husband’s co-workers, who continue to donate money and perform random acts of kindness, such as Bly’s surprise mascot delivery.
“We had a Christmas angel — someone took care of us, took care of everything for us,” said Lynn-Marie Viana. “I can’t talk about it too much — I get emotional.”
She’s still trying to work out a home-schooling program for Tommy, who hasn’t been able to attend Grinnell Elementary School since early November. Right now he has no immunities due to the medication he’s taking.
She watches as Tommy and his brother, 10-yearold Alex, sit together on the hospital bed looking at the pile of goodies left for them by Wally, including a plastic vile of Fenway dirt and a miniature Wally doll.
Tommy removes his Red Sox cap, the black ink of Wally’s signature still not all the way dry, revealing the scar that runs down the back of his head from his first surgery. He nestles the tiny green monster doll into the cap and tucks it into the bedside table drawer, still clutching the bottle of brown diamond dirt in his other hand, and giving it a shake right next to his ear.
He smiles at the sound it makes, and flops back onto the bed, next to his brother.
“Tommy understands what’s happening, but we don’t say too much in advance. He’s been a trouper,” she said. “And Alex — he’s the big brother. They’re close, only one year apart.
It’s scary, for both of them.”
If there are no signs of improvement from the drug therapy, surgeons will have to do what’s called a hemispherectomy — severing the two halves of Tommy’s brain, which will disable the side affected by the disease, and should stop the seizures. Because he is so young, the hope is that the other side of his brain will compensate.
“We’re hoping the symptoms will begin to improve after this, and if so, he will start another round of drug therapy,” said Tommy’s mother. “Honestly, it’s so rare and there are so many other things going on, that we really don’t know much about what’s going to happen. All we can do is hope for the best.”