A Little Rain Must Fall 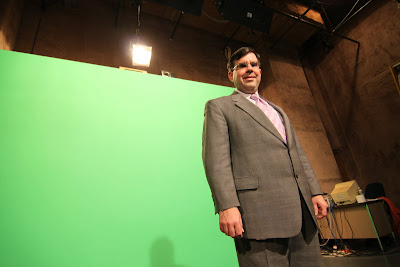 DERRY – Al Kaprielian seems subdued. As he politely talks about the current atmosphere inside the MyTV New England studio, how slumping economic fronts and the high pressure of bottom lines formed a dark cloud over his 26-year career, the jovial, zany Weatherman Al who has cornered the local meteorology market is vapor.

Then he leads you to his office. It is utilitarian – three computers, a telephone and a small pile of paperwork. White walls are punctuated with a handful of year-old photocopied sheets of paper, wishing him a Happy 25th Year in the weather business. Hanging from the ceiling light fixture is one more paper, “High Pressure,” it reads. That phrase has become a hallmark of Kaprielian's unique elocution, a trademark phrase he delivers consistently, weather permitting, in registers that could break glass or round up a pack of dogs.

"High pressure always brings the good weather. It's happy. I've always just tried to be sincere and enthusiastic. I like to make weather fun,” he says, a glimmer of that on-air sunshine peering out from the cloud of pending unemployment doom.

Kaprielian was one of eight from the local cable network notified earlier this month that they will be out of a job come Dec. 31. A lifelong New Englander, it has been Kaprielian's one and only gig. He was hired in 1983 right out of college on the merits of his work at the student-run TV-station and, of course, based on a memorable audition at the burgeoning local network. His fresh-faced unscripted delivery of the weather includes a wide range of vocal and facial expressions, props, whimsical graphics and off-the-cuff weather-related insights.

First-time viewers have wondered out loud whether Kaprielian is for real. What comes off at first like a “Saturday Night Live” weatherman spoof has actually put Kaprielian on the map of most memorable weather prognosticators – perhaps the region's most beloved meteorological marvel since the advent of Doppler Radar.

As he leans over one of his computers and checks the graphics for his upcoming 55-second weather update, Al the Weatherman rises from the gloom. He excuses himself three times to answer the phone, once to provide a rapid-fire up-to-the-minute weather flash for a fellow employee. He sidles over to another computer and clicks on a map he has configured to track a storm currently swirling over the the south.

"I can loop this map for 384 hours,” says Weatherman Al, demonstrating a stop-action feature to illustrate where the storm will be, hour by hour, as it heads north.

“And there it is, Sunday afternoon,” he says, his voice rising. With a flourish of his arm as he clicks through the colorful radar map, releasing the mouse and grinning, like a Grinch who found Christmas.

He spends another 10 minutes going deep into meteorological territory, rattling off radar-related lingo as momentum returns to his voice and animation, to his face.

That is familiar territory for Kaprielian. Not just because he's done plenty of guest appearances in local schools over the years; it taps into his primal passion for weather, something that dates back to his own childhood, circa 1960something – he's not sure when he first discovered the outside world, but it was early on, and right outside his door.

“I was always excited about the weather, I can remember watching every thunder storm and snow shower from my window as a kid. By the time I was in sixth grade, I was doing daily weather reports in class. That lasted all the way through junior and senior high school,” says Kaprielian.

His meteorological rise continued right after graduation in 1979 from Natick High School. Kaprielian enrolled at Lyndon State College in Vermont – because it had a strong meteorology department, preparing him well for his 26-year run at MyTV, formerly WNDS, in Derry.

“I've thought about my options. It would be tough to move somewhere else. I hear the big stations are cutting back, too – even the Weather Channel,” he says.

Besides, he's a New Englander to the core. This is the weather he loves and understands, from its traffic-stopping “blizzahds” to the always welcome jet streams bringing “hiiiiigh preshah” followed by blue skies.

“I just don't know if they'd get the accent someplace south, like Florida,” he says. “Not everyone gets it.”

As he searches for the next opportunity of his lifetime, Kaprielian wants to revisit some of his other passions.

“I enjoyed playing sports as a kid. I used to be on a bowling league at Fairway Sports World in Natick. I've been thinking about getting back to bowling. Maybe now's a good time,” he says.

His immediate outlook includes enjoying the holidays, spending time with family down in Massachusetts, and looking for that silver lining.

“It's been an excellent run. How many people these days can say they've had the same job for 26 years?” he says. “Whatever I do next, I want to be involved with the public – on-air again, and staying involved in every way I can. If they wanted to end it here, that's their business. It may be over in this building, but it's far from over for me.”

EDITOR'S NOTE: Since this story ran in the Dec. 18 New Hampshire Union Leader, Kaprielian has resurfaced on MCAM, Manchester Community Access channel 23. While it is an unpaid gig, it keeps Kaprielian on the air, providing daily one-minute forecasts. For more, go to www.mcam.org