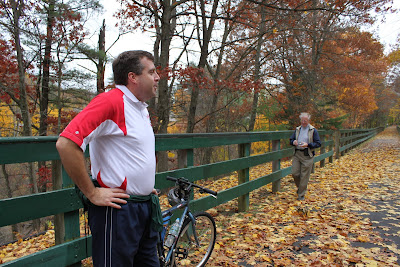 DERRY – There is an unmistakable pride in the way Mark Connors pushes the pedals of his bicycle along the newest stretch of the Derry Rail Trail, freshly paved in July.

There are only a few others out on a blustery October afternoon at this particular juncture, but Connors knows that the efforts of the Derry Rail Trail Alliance – to complete the remaining stretch of unpaved rail bed between Derry and Windham – are not in vain.

He knows because those who have discovered the scenic pathway have told him so.

“The number-one question we get is: when are we going to extend it,” said Connors, who got involved with the local trail advocacy group from the perspective of a dad whose kids were already loving the town's bike loop, established 20 years ago connecting parks and schools.

Once he stumbled upon the trail, he wanted to know more about the path, specifically when was the unpaved section between Derry and Windham going to be finished. Since then, he has been part of the volunteer effort to complete the 10-mile stretch that would connect the two towns – and beyond.

Last week Connors joined a delegation of trail supporters who are looking ahead to the next phase of the regional project, which would snake north along the old M&L railroad corridor, eventually connecting to Concord. They are lobbying for a share of limited state money.

Their pitch is simple: This project means more than a way for families to wile away an hour on a sunny day; it's the future of alternative transportation.

“Statewise, when we need political clout to make our voices heard, we can look to one another, and we might save some time and repeated effort solving the same problems and issues along the way,” said Dave Topham, of the Bike Walk Alliance of New Hampshire, a 22-town collective of like-minded groups pushing ahead with the vision of an alternative transportation corridor.

Such trails get at solving several of the issues of the day – obesity, health care, boosting tourism, green alternatives to fossil fuel, says Topham.

“Believe me, we are preaching to anyone who will listen. We're billing this to be a transportation corridor that runs parallel to I-93, connecting three of the four most densely-populated communities in the state – Derry, Manchester and Salem,” Topham said.

“The buzz word that pops up lately is 'intermodal' transportation – theoretically, people could bike to the park-and-ride at Exit 2 in Salem, or 5 in Derry, load their bike into the luggage compartment of the bus, then take the bus to their destination. From there, they could bike to a train or get wherever they were going,” Topham said.

All examples point to Windham's rail trail. More than a success story, it is a source of inspiration to those in towns along the rail bed who want to replicate what has become a heavily-traveled scenic route for bikes, pedestrians – even horseback riders.

“We've accomplished what we set out to do, making this trail useful for bikers,or babies in strollers, or a great place for a kid to see a horse for the first time, close up,” Samsel said. “We've actually had more horse traffic now than before it was paved. This kind of community interaction would have never happened as the trail was being managed nine years ago. It has truly opened up opportunities for more users, including the elderly, who wouldn't have found it passable as it was.” 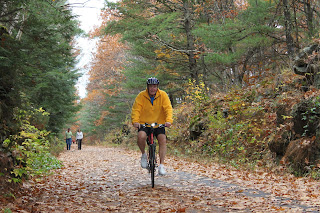 John Dalrymple rides daily for his health.
Case in point: John Dalrymple, of Atkinson, who was pedaling his 10-speed along the trail Saturday, as he does just about every other day of the week, weather permitting.

“It's fantastic, but I'm ready for more,” said Dalrymple, 71, who has found daily bike rides a boost to his health.

Others, like John Smith and Brian Grafton of Derry, have found a clear and direct path to an optimal fishing hole.

“We used to walk down here to go fishing when I was younger, but the train tracks made it impassible. I left town in 2006, just before this happened. I only just discovered this trail a few months ago. It's definitely an added bonus to life in Derry,” Smith said. “I even ride my bike on it.”

“And the fishing is awesome,” added Grafton. 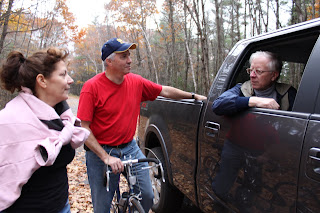 “We've been having great family time since this was paved,” said Paula Quigley. “We'd never be able to do this otherwise. A friend of mine introduced me to it – we trained for a 5k here because it's perfect – it's level and there's no traffic. I only want to know when they are going to get it finished down to Salem. What do I have to do to help make that happen?”

Topham tells her that the plan as of right now is to extend the trail into Salem by 2011. As for helping the cause, Topham said the best thing anyone can do if they are interested in seeing the rail trail continue to grow and thrive is to use it.

“Once people have been out here, and they understand not only the beauty of nature that's all around, but the different opportunities it provides, they get excited about it, and they help to spread the word,” Topham said.

Creating an alternative way to see the state, from a tourism standpoint, should encourage businesses along the route to cater to foot or bike travelers. But it will need promoting if it is going to succeed.

“Ideally, you could walk to Derry from Windham for an ice cream with your family, or to shop,” Topham said.

The broader rail trail picture includes replication and expansion of initiatives with state and federal backing, such as PATH – Program for Alternative Transportation and Health – a pilot bike share program between St. Paul's School and New Hampshire Technical Institute in Concord. It provides free bikes to anyone who wants to use the program, as long as the bike and lock are returned within the agreed-upon rental period – 24 to 48 hours. It's a method growing in popularity in cities abroad that may set the standard for creation of bike commuter-friendly cities and towns around the state.

“They're currently working out the finer points, but once they do, they are looking at expanding the bike share to human services, police and state offices on Hazen Drive,” Topham said.

On the web: For more information on supporting efforts to complete the trail in Derry, or to find interactive maps: Derry Rail Trail, www.derryrailtrail.org; For more on expanding bike paths, bike safety and legislative action, Bike Walk Alliance of New Hampshire, www.BWANH.org