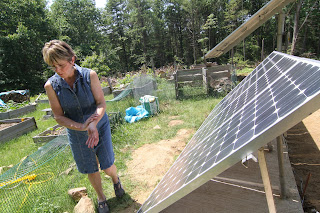 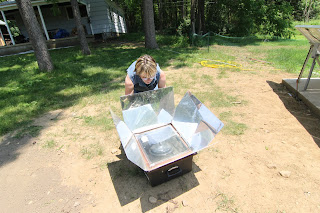 Baking potatoes in a solar oven..
“I attended the first Earth Day in 1970. I remember the 1973 Arab oil embargo, the oil crisis in 1979 with Jimmy Carter, and the gas lines. Back then, I wanted solar power so badly, but it was a technology that was out of reach for most people. Now, it's right in my back yard,” said Byers, practically misty over the blue-and-silver solar tree that has become the MVP of her 50-acre family tree farm.
“Isn't it beautiful?,” she says, watching the afternoon sun drench the 14-panel solar photovoltaic array looming in her yard in what's called a grid-tie connection – it turns sunshine into electricity through an inverter, which feeds directly into her electrical system. On the sunniest of days, if the panel absorbs maximum energy, her meter will spin backwards, as it did last week, feeding excess solar energy back into the grid.
It's something Byers refers to as having a “LITINU” day – that's Unitil spelled backwards – on her daily blog, Harvesting the Sun, where she is chronicling her experiences living solar.
Brian Pellerin, a principal with Freedom Renewable Energy in Derry, predicts Byers will probably never pay another electric bill.
“Ann is unique in that she is doing a lot of other things to live green and reduce her energy consumption. But anyone can realize dramatic savings by going solar,” said Pellerin. 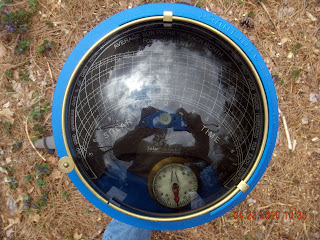 His company, established in 2007, is relatively new in a rapidly growing and competitive field of alternative energy providers. Using solar science, Pellerin's crew will give a free estimate of the viability of going solar by using a Solar Pathfinder, a globe-shaped instrument that can actually show down to the hour, how much sun your property gets every day of the year.
“For the first two years we guarantee the amount of savings you'll realize, and if not, we will pay you the difference,” Pellerin said. “We try and make the investment foolproof.”
That was the beginning of what impressed Byers so much. She knew she wanted to go solar, but in learning about how efficient – and affordable – the new technology is, she was moved to launch the blog in the hope that others will join her on the sunshine express.
“I called around for the longest time, but I couldn't get anyone to come out to my house to even see if it was doable. You don't know how frustrating that was, or how much this means to me, to be relying on the sun to power my home,” said Byers.
In dollars and cents, the cost of solar is about $8 per watt installed, said Pellerin. So using Byers' 14-panel 3,000-kilowatt array as an example, the cost on paper was $24,000. Minus the 30 percent federal tax credit being offered as part of the American Reinvestment and Recovery Act, Byers will get back about $8,000 from the government, plus another $6,000 rebate check from the state, bringing her total investment down to about $10,000.
“And given her electric savings, Ann's system will pay for itself within about five years,” Pellerin said.
Such incentives are meant to spur a burgeoning industry, Pellerin said. The federal tax rebate is good through 2016, and the state rebate is drawn from quarterly cap-and-trade auctions which fund the state's renewable energy program.
In addition, newly-passed legislation known as PACE, or Property Assessed Clean Energy Financing, will make renewable energy more affordable for everyone, Pellerin said. Under PACE, municipalities will lend money to property owners to install an energy efficiency project which is then repaid through a rider on the property owner's taxes.
Byers said her journey began with baby steps. Although her mind and and spirit have always been Earth friendly, it took a while for Byers' lifestyle to catch up.
“I wasn't even composting,” she says in hushed tones, unable to mask the shame she feels for her lapse in garbage collecting.
In a former life she living in a condo with her husband, Harry, and teen-aged daughter, half of a two-car family working in marketing for a major money center bank. Then her job was moved to Boston, which meant a longer commute and more time away from home.
“My husband begged me not to buy another pizza for dinner. It had become a quality of life issue,” Byers said.
So 20 years ago she became a stay-home mom, got involved in her community, joined the Master Gardener group through UNH Cooperative Extension and got involved with the family tree farm, mostly white pines, which she took on after moving back into her childhood home in Newton.
“We do good forestry management. It's helped me get rooted in the earth,” said Byers. 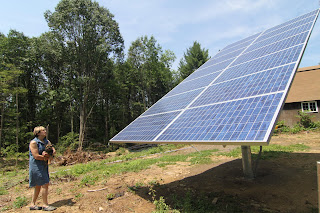 She composts everything she can, and uses a Solar Oven to bake things outside between April and October. They h installed a wood-burning cook stove in the kitchen, which heats the entire house, and an induction cook top which cooks more efficiently without generating heat. They have replaced every light bulb with compact fluorescents, and recently invested in a Sundanzer refrigerator and freezer, which will run off a DC battery powered by the sunshine she's harvesting.
Their old hot-water heater was replaced three years ago with one that's “on demand,” eliminating the holding tank of preheated water, and her old oil tank is rusting in the basement, a monument to how carbon neutral she's become.
“This is all the process of a dream for me,” said Byers. But I'm not just on a personal mission. It's an American thing to do, a patriotic thing to do. As a country, we have to get away from fossil fuel. Otherwise, what kind of earth are we leaving to our children? Forty years ago we were moving in the right direction. It's taken a while to get back to the point where people are excited again about solar energy, but it's happening.”
On the web: www.harvestingthesun.blogspot.com
www.freedomrenewable.com