THE GIRLS OF SUMMER 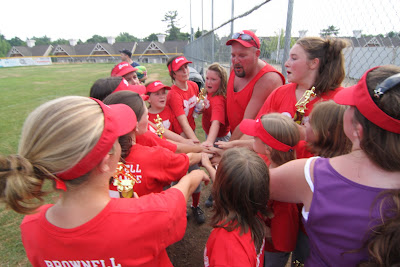 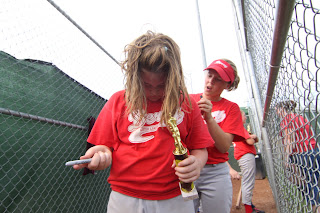 “There are no losers this year,” said the loudspeaker voice from the press box as Brownell huddled for a team photo in center field to celebrate their 12-9 victory. Their formidable foes, Derry Imaging Center, settled for second-place trophies and star-shaped chocolate lollipops.
After two rain delays, the six-week season ended yesterday where it began in May, on O'Hara field. It took several years of planning, but this year the League took over the town's recreational softball program and fielded four teams in the 9 to 12 age group. Greater Salem Footcare and Fred Fuller Oil competed with Brownell and Derry Imaging, enjoying all the perks of regular Little League competition – uniforms, concessions, music, manicured field, diamond dirt and a scoreboard, although Brownell coach Al Walalis insists the girls are more focused on learning and fun than standings or scoring.
“They don't pay that much attention – neither do we. I can't honestly tell you what our record was this year,” Walalis said.
Organizers are already looking forward to expansion next season.
“Some of these kids will be 13 next summer. Maybe we'll start a senior league,” said League Executive Vice President Donald Kirkland.
He said the league had hoped for more players this season, but had a tough time fielding teams in the younger and older age groups. “That's OK. Before you walk you gotta crawl,” Kirkland said. 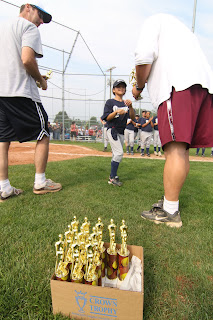 League President Steve Tritto regards the addition of girls softball as the best thing to happen to Derry's Little League program in a long time.
“We're here with two great teams playing championship softball on a beautiful Sunday afternoon. It doesn't get any better than this, and their success is a testament to the four team managers and all the parents,” Tritto said.
Coach Walalis almost didn't make it through the tension of the sixth inning.
“We've been battling all year long with this team. They've had our number all season, beat us every game we played,” Walalis said, pacing a little as his daughter Ashley settled into the zone.
Although the game remained close and was all tied up, 9-9 in the fifth inning, Brownell took a three run lead in the sixth, and held it for three fast outs, erupting in cheers as they ran victoriously to the dugout.
After trophies were handed out to both teams, Walalis called his team back for one last bit of coaching.
“Everybody, hands in,” he said, as the girls made a circle around him, clutching trophies in one hand and piling their outstretched free hands into the center. “I couldn't be prouder of you girls. One last time, Brownell Insurance, on three.”
And with that, the girls called it a season – “One-two-three-BROWNELLINSURANCE,” free hands flying up in the air, a fitting end to the beginning of something bigger than all of them.
*Editor's note: Thank you for all the Anonymous comments. Unfortunately that makes it hard to  respond directly, but to those parents disappointed about 'coverage' of the game, let me clarify:
I came out to get a photo of the championship team, not to provide coverage of the game. I arrived after 2:30 pm expecting the game to be wrapping up, but due to rain delays which I wasn't aware of, I got there at the top of the game, not the bottom. Instead of going home, I stayed for the next 90 minutes on my own time, standing on the "visitor's" side where I was directed when I arrived, and mainly took shots at the end, of the teams congratulating one another, receiving trophies and then of Brownell celebrating victory. It was never intended to be a photo shoot of the game. I did do a feature about the league in May when it launched, and took photos of both teams at that time. That story is archived, and photos were posted here. While I understand the feeling that some feel Derry Imaging should have been featured more prominently after such a great season, I am not a League photographer; I was there for the news, and on this particular day, it was to take a photo that summed up the game's outcome. I posted the slides at the request of several parents who saw me taking photos after the game. It was meant as a courtesy, not a slight, and I just wanted the chance to explain. I also wanted to point out that of the town's three newspaper's, I was the only reporter/photographer who came out for the championship game. CR