DERRY – It was the best of times for Patrick Moulton, who ran away with yesterday's Boston Prep 16-Miler, clocking in at 1:25:56.

“He's not here today,” said Sandy Moulton of “the other twin,” Casey. She was waiting near the finish with her husband, Brian, and Patrick's girlfriend, Katie Twarog, to cheer Patrick on to victory.

“We have no idea how they got to be so fast,” she said. “They started running seriously in seventh or eighth grade. They finished together in their first race, and pretty much it's been like that for them ever since.”

Still, it was one for the books, yesterday, as Moulton, 28, crossed the finish line two minutes ahead of his closest competitor.

“My strategy? To go hard and run all the way,” said Moulton, a Pelham native, just before the start of the race. A graduate of Providence College, Moulton now resides in Rhode Island. He said he was feeling good yesterday, coming off his recent first place finish in October's ING Hartford Marathon, his second consecutive win in that race. He's training now for the SunTrust National Marathon in Washington, D.C., which he won last year.

Greater Derry Track Club race director David Breeden said he registered a record number of runners for this year's Boston Prep – 849, including second-place finisher Justin Fyffe, who decided to run only about four hours before the race. He made it to Derry Village Elementary School from Keene for registration with an hour to spare.

“Yeah, it was kind of spur of the moment. I was planning to take the weekend off, but then my wife said maybe I should go. So I woke up and saw I had a text from David, asking if I was still thinking of running, and here I am,” said Fyffe, who was happy with his time of 1:27:57.

Finishing behind Fyffe in the No. 3 spot was one of his training partners, Andy McCarron, 27, of Keene, who finished in 1:31:04.

Derry's Boston Prep is known for its challenging terrain, which loomed large in McCarron's mind.

“I think it was actually worse for me this year, because I knew what was coming,” McCarron said. “I definitely felt tired on the hill.”

Claire Gadrow, 40, of South Kingstown, R.I. represented for the ladies, with a time of 1:48:47. It was her first time running the Boston Prep – but it won't be her last, she said.

“It's a hard course, but I will definitely come back. It's a great test for Boston, and you can really get a good sense of your fitness,” Gadrow said. 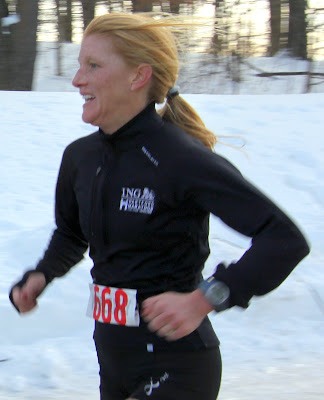 Gadrow, who finished 34th, also represented the race's largest demographic – runners over 40, said Breeden. Thirteen of the top 35 finishers were 40 or older.

“The 40 age group is one of the toughest age groups in the area. They are our strongest competitors, in terms of strength. In fact, I'm happy to be going into the 60-plus age group, because all the 40-year-olds are moving up into the 50-plus group,” Breeden said.

“They aren't going to beat the Patrick Moultons and Justin Fyffes, but they are the core of this race and were well represented among the top finishers,” Breeden said.

Breeden has been coordinating the race for 10 years.

“At the point I took it over, it was losing money. But I instituted some changes every year to make it a little bit better, and now we clear about $10,000 for the club. We've sold out the last four years, and this is the earliest we've ever sold out – a good three weeks before the race,” Breeden said.

It's hard to know which came first – the chicken or the egg, Breeden said. Are more people running these days because there are more races to be run, or are there more races because so many people are getting into running?

“I don't know the answer to that, but I do know races in New England are increasing in size. Every year there are new races all over the country – tons of new races. But there's no place like New England,” Breeden said.

Proceeds from the race support the GDTC's Summer Fun Runs for Kids, which last year saw more than 600 participants and collected more than 1,600 pounds of non-perishable food donations for the local food pantry.

“We have fewer than 100 packets that haven't been picked up, so that means we will have well over 700 finishers,” Breeden said. “The weather couldn't have been better, and everything has gone as planned. I've done this so many times now, and I've delegated so much of the responsibility to so many club members, that it really does run itself. And I like it that way.”