Dining in the Dark@Pinkerton Tavern 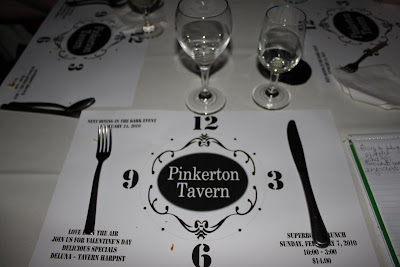 DERRY – Dining in the dark is more than a culinary experience; it's a sociological experiment that reveals just how much we think – and react – based on what we can see.
That much was obvious to Dave Spirdione, who was trying to decipher his entree while blindfolded during a recent Dining in the Dark experience at the Pinkerton Tavern.
Halfway through the seared diver scallop with egg nog sauce, Spirdione had a revelation.
“Are my eyes getting in the way of enjoying a lot of things in life?” he asked, his rhetorical question resonating with the other diners seated nearby.
“In some ways, I would say yes,” replied Elizabeth Hayward of Derry, seated across from Spirdione.
Spirdione had just gotten a whiff of the wine placed by his waiter at 12 o'clock on a clock-themed place mat. “Oh, it's red. I don't like red wine.”
He changed his mind after a second sip. 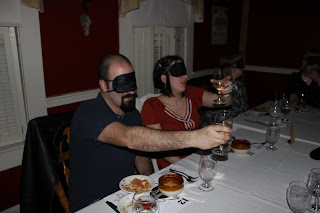 “There are a lot of flavors here. Let me try to explain the taste. There is a berry taste in there. Strawberry? You know, I have been judging wine by its color. I need to try a little harder, because you know, I'm totally overwhelmed by this. I am liking red wine.”

Meanwhile, Spirdione's fiancee, Kim Hodnett, was trying to describe the flavors going on inside her own mouth.
“It's like butterscotch with whipped cream,” she said. “You know, I have already realized that I would never want to lose my sense of sight. Ever. This is a little frustrating, not to be able to see what you're eating.”
Tavern proprietor Guy Streitburger and his wife, Jen Lutzen, didn't mean to frustrate anyone. But given his penchant for experimental cooking, Streitburger was instantly drawn to the idea of dark dining. He said he'd read something about the European dining phenomenon, gaining international momentum and even inspiring restaurants here in the U.S. specializing solely in blindfolded dining experiences.
After doing some research, Streitburger and Lutzen thought it would be fun to put their own spin on the fad, which originated more than a decade ago in Zurich.
The concept of blindekuh – or “blind cow,” the German name for the game “Blind Man's Bluff,” was developed by a blind clergyman and a partially sighted psychologist who thought up the concept as a way to raise awareness – and understanding – among the sighted community for the challenges faced by the blind.
At the same time, they developed a business plan for a restaurant where diners eat in darkness to heighten their other senses. Servers are all blind or partially blind. From that concept, Blind-Liecht Foundation was launched to channel profits made from the restaurant toward projects that benefit the blind community.
That particular angle is what attracted Maribeth and Scott Geraghty of Londonderry to the Pinkerton's Dark Dining experience. Their 8-year-old daughter, Gabey, is blind. 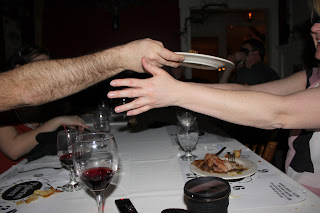 After dinner was over, they talked about their take on eating in the dark.
“It reinforces to me not to be judgmental,” said Maribeth. Beyond her taste in foods based on the familiar, she learned that conversing at the dinner table with strangers seemed much easier, socially, without being able to see. Her husband agreed.
“Yes, I think if I were blind, I'd be able to communicate without judging anyone. Sometimes we're put off because of the way someone looks, or our perception of how they see us,” said her husband.
They had invited their daughter's teacher, Sandi Brown, who was seated next to Susan Sherry, a mobility instructor with the New Hampshire Association for the Blind, who works with Brown.
“I learned a lot,” said Brown. “Now I can appreciate more of what Gabey is doing and how she's doing it in school. I am exhausted just from eating a meal. I actually gave up on some of the dishes. Without being able to see what it was or how to approach it, it felt too much like work, and I quit.”
Sherry said the experience confirmed what she already knew.
“It's hard to be blind living in a sighted world. You need to be able to be independent, and it takes a degree of feistiness to be independent,” Sherry said.
Hayward and Hodnett said they felt being blind held them back from their normal social behaviors. Without visual cues – knowing whether you have someone's attention during a conversation, or whether you are eating too fast or too slow compared to others – it was harder to settle in.
Spirdione had an opposite experience.
“I felt more relaxed while blindfolded, more secure,” he said.
Cassie Brothers was seated in the next dining room with her husband, Rick, and six others they hadn't met prior to the meal. After dinner, they also considered how eating blindly affected their overall experience.
“I think when you know what you're eating, you like it better,” said Brothers. “Even if you are blind, normally you will know what you're eating. You aren't just served mystery food and expected to eat it without knowing.”
Karen Pouliot, of Derry, had the opposite experience.
“For me, that's why this is so much fun. I think you have to be a little adventurous to enjoy dining in the dark. But when the food comes out, you smell it and touch it, you aren't quite sure what you're tasting, but especially at a place like this, you know whatever it is, it's going to be good,” Pouliot said.
As the dessert plates were cleared, the waitstaff distributed menus to everyone, so they could see what it was they had actually eaten. The thick sweet-and-sour soup was carrot puree with a seaweed salad and monk fish meatballs. What many diners guessed to be pigs in a blanket was actually duck sausage in puff pastry with apple smoked bacon and mango raspberry glaze.
Also on the menu: scallops with steamed purple cauliflower, veal cutlet bundled with asparagus, smoked ham and manchego cheese, pan fried potato crisps, and a white chocolate mousse served in a chocolate dome with raspberry jam.
“We were going to have photos of all the dishes on display afterward, but then we thought it would be better to leave the presentation to the diners' imaginations,” said Lutzen.
Spirdione was already asking about the next Dark Dining event at the tavern, scheduled for February 24. Seats are still available, Lutzen told him.
“I came here thinking it would be fun, maybe a little exciting. But I never thought I'd get a lot smarter in the process,” Spirdione said. “I think sitting with a couple who have a blind daughter helped me to think differently about my own experience. It was so much more than I expected.”
The next Dining in the Dark experience is Feb. 24. Tickets are $50 per person, and include a five-course meal, wine and a blindfold. To reserve a spot call 435-6665 or go to www.thepinkertontavern.com for more information.