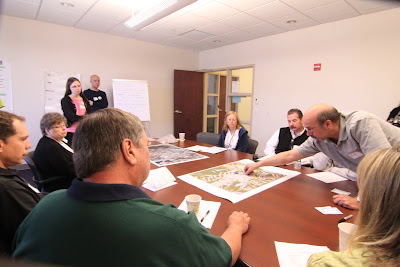 Jim MacEachern points to a downtown map during a discussion at yesterday's Civic Profile.
By CAROL ROBIDOUX
Union Leader Correspondent
DERRY – Yesterday's five-hour Downtown Civic Profile workshop drew nearly 50 residents and resulted in five solid goals meant to enliven the town, both economically and physically.
Key discussion points included sprucing up the general appearance of Broadway, and putting serious thought into the kinds of businesses that should be included in the mix.
Aided by Michele Gagne of UNH Cooperative Extension and a small army of grad students from the SIT Graduate Institute in Brattleboro, Vt., participants first took in a slide show of Derry over the years, as a way of considering the past in the process of moving forward.
Five groups were then dispersed throughout the town municipal center, to consider: aesthetics and visual themes; entertainment, food, culture and recreation; making the town more pedestrian friendly; being more business friendly; and traffic and parking.
Participants spent the next two hours brainstorming, with the common goal of isolating the best ideas of the day, which were then rated in terms of how much impact an idea had and how feasible it would be to implement. 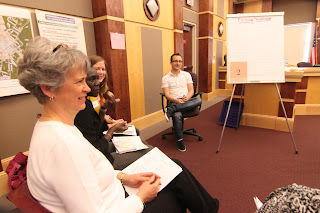 Most populated was the “business friendly” group, driven by the town's current thrust toward economic development and the prospect of finally building an Exit 4A, which would channel traffic more directly in and out of Derry.
Group member Lori Dunkerley, who moved to Derry about five years ago because of its convenient location between Massachusetts and Maine, said now that she is a mom, she'd like to see more family-friendly businesses downtown.
“I wish I could pop my daughter in her stroller and go downtown to grab a bite to eat and just stroll,” said Dunkerley. She works in Lowell, Mass., and said that town has done much to redeem its downtown – and might serve as an example for Derry.
“They've done a lot to revitalize Lowell, which certainly still has issues – but I've seen some dramatic changes in the last decade,” Dunkerley said.
Newly opened Halligan Tavern was cited as a positive addition. But the recent loss of the Blackberry Bakery, and the persistence of several vacant storefronts remains a problem. Some mentioned the need for good anchor stores – like a Trader Joe's or other specialty or grocery store, a coffee shop or other business to add more variety while complementing existing businesses.
After much discussion, the group zeroed in on the need for a downtown merchants group, to enhance communication among business owners and put some of their better ideas into action.
Other priorities identified by the groups:
Improving facades of existing businesses, perhaps providing incentives to business owners; develop a year round farmer's market; improve crosswalks and extend existing brick sidewalks; and building a multi-level parking garage.
A few groups talked about the need to renovate an abandoned pet store near the busy intersection on Broadway at Crystal Avenue, which is an eyesore, and working with the Friendship Center – a non-profit organization that provides support and meeting space for various addiction-recovery groups – to find an alternate location.
“It's good to have, but it's the wrong place,” said Jim MacEachern, a member of the Planning Board. He and others in the group said that because group members often stand in front of the store to smoke, or park motorcycles outside, it can give off an intimidating vibe.
Planning Department Director George Sioras said he has spoken with Friendship Center director Bob McFarland, who has expressed the need for moving to a larger building, but because they are a non-profit entity, money for rent is an issue.
“We know it's a problem, and we would like to do whatever we can to help,” Sioras said. 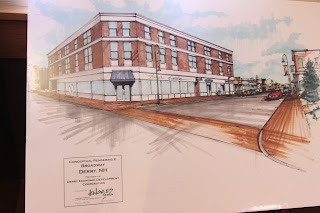 He said overall, given the meeting was held on a glorious Saturday morning, and coincided with the start of school vacation week, the turnout was good.
He pointed out a series of conceptual renderings on display, commissioned more than a decade ago to show how the downtown might look with enhanced facades or renovation of existing storefronts.
“They are still relevant – and a few of the existing businesses, like Darren's, modeled their facades after the renderings,” Sioras said.
“And this one,” said Sioras, pointing to a quaint-looking structure on a familiar section of Broadway. “This is where the gas station next to Benson's is. (Owner) Brad (Benson) is actually going to use this as a model when he builds a new retail space there. So in a way, it's like some of these drawings are finally coming to life.”
Once Gagne assembles the information from the workshop, a follow-up meeting will be held May 17 at Adams Memorial Opera House from 6 to 8 p.m. to share results with the public and continue with an action plan.