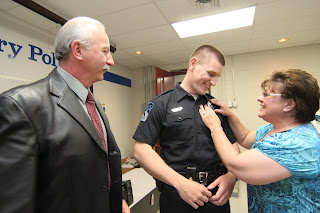 DERRY – Kids are impressionable, which is why hanging around the good guys is not a bad idea. It worked out well for Jonathan Imperial. On Friday, he was sworn in as a Derry Police Officer.
“When he was about 4, there was a break-in at his grandparents' house down in Saugus (Mass.,)” said his dad, Michael Imperial. “His cousin was a police officer and was the one who came in to investigate. Jon knew that day. He watched everything his cousin did, and from then on it's all he's wanted.”
Although Imperial, 22, doesn't remember it so vividly, he knows he has always wanted to be a cop – and having former Londonderry Police Chief Joe Ryan as a lacrosse coach and mentor throughout high school just reinforced his career goal.
It was Ryan who recommended Imperial for a spot at Westfield State College, where he majored in criminal justice, with a minor in sociology.
“He worked really hard to finish college early so he could qualify for this job,” said his mother, Cheryl Imperial. “He asked his professors if they were all on board with his plans to graduate in April, and all of them said yes, but one – so he dropped that class. He finished on Good Friday."
A 2006 graduate of Londonderry High School, Imperial played varsity football and ran track, while working at the Londonderry Market Basket.
The swearing in ceremony Friday was brief, but Police Chief Ed Garone spoke from his heart as he urged Imperial to take in the moment and remember it always.
Now he will spend 14 weeks training at the Police Academy before hitting the streets of Derry, which he said he's looking forward to patrolling.
“Coming from Londonderry, I don't know the layout of Derry yet, but I know the people – and there are a lot of good people here,” Imperial said. “This is a dream come true for me, it really is.”
Also there to celebrate his big day were both his grandmothers, his grandfather, an uncle on his mom's side, and aunt on his dad's side, his sister, Nicole Imperial, his longtime girlfriend and high school sweetheart, Rachel Oleson, and her parents.
“His goal was to have a job by the time he graduated from college. He pushed himself to figure out what didn't know and what he needed to work on, and then learn it all so he could pass the test, and he did it. We couldn't be prouder of him,” said Imperial's father.
EDITOR'S NOTE:  Officer Imperial's graduation from LHS has been corrected from the original version posted. Thanks to "Anonymous" for calling the error to my attention, and thanks for reading. CR