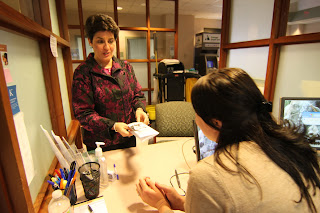 DERRY -- After 10 months of getting settled in at the helm, Parkland Medical Center CEO Tina Legere is ready to put her hospital on the map.
Despite another year of top industry- wide ratings for patient care, Legere knows that her 86-bed hospital is easily obscured by its much larger counterparts in Manchester and Boston.
“We were the only hospital in the state last quarter to achieve the highest rating in core measures by the Center for Medicare and Medicaid Services,” said Legere. “I’m proud of the fact that quality care is No. 1 at Parkland. It’s a message that goes down to every employee — I just don’t know if folks realize the quality organization they have right here in Parkland.”
One of her favorite statistics to quote is “door to balloon time,” which indicates the time it takes a patient arriving with a blocked artery to find relief with a balloon catheter.
“It’s 68 minutes — that’s well below the standard best practice of 90 minutes,” said Legere, noting that it is the shortest wait time in the state.
“If you’re having a heart attack, you don’t have to drive past Derry to get to Manchester or Boston,” said Legere.
Parkland, owned by Hospital Corp.
of America, operates hospitals around the country including Portsmouth Regional Hospital and outpatient centers in Portsmouth and Salem.
Legere is also proud of her hospital’s relationships with the New England Heart Institute and Lahey Clinic — providing what she calls “top-notch patient care,” all at a little community hospital just off the beaten path.
In speaking of the CMS core measure ratings, Legere said it’s important because the ratings are based on standards applied uniformly, regardless of a hospital’s size or patient base.
And while most hospitals in New Hampshire score well, it’s still an important and objective indicator that a hospital is doing its best in critical- care situations, said Dr. William Kassler, chief medical officer for the New England region of the Center for Medicare and Medicaid Services, which operates under the U.S.
Department of Health and Human Services.
“Although New Hampshire as a whole does well when it comes to outcomes and quality of care, we know across the country the error rate is higher than what patients would demand, and we know we can all do better,” said Kassler.
Having a standardized set of measures becomes a way to increase public accountability while also helping hospitals promote what they do well, which is meaningful for both patients and staff, Kassler said. Legere came to Parkland after spending many years as chief quality officer for a competing Manchester hospital. But it is her roots in medical social work that have kept her grounded in what a hospital’s mission is all about.
“Being in the trenches helped me understand what it is that patients need. It’s given me a great appreciation for how all the various systems within a hospital work together to achieve that,” Legere said.
“I know that physicians have a choice about where they work and patients have a choice about where they seek treatment, which is why it’s important for me to keep my finger on the pulse of what both patients and staff are saying,” Legere said.
To that end, she goes on rounds with physicians as often as possible for direct feedback from both patients, doctors and support staff.
In addition, patients are invited back, post-treatment, to talk about what worked and what could have gone better.
“It’s important that we continually ask patients what can we do better,” Legere said. “At the end of the day, we want Parkland to be the hospital of choice for patients and staff.”