The Thrill of the Trot 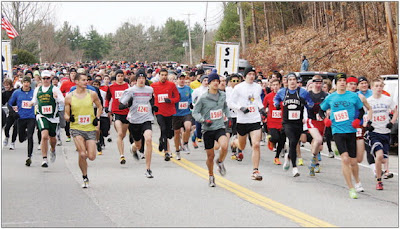 By CHELSEY POLLOCK
Union Leader Correspondent
DERRY - Last Thanksgiving, Lisa Luz of Derry watched the sea of runners in the town’s annual turkey trot pass by the window of her Beaver Lake home, where she was recovering from a bilateral hip replacement surgery.
“I could barely walk, but I said I’m going to do that next year,” Luz, 40, said of the race. And after a year of training, she did.

“It feels awesome,” Luz said at the finish line of Derry’s 37th Annual Turkey Trot Thursday morning. “I’d like to be faster, but you know, maybe next year.”
Luz’s husband, Dave is also new to running this year, and said he wanted to come out to support his wife in reaching her goal.
“I’m just so proud of her and I figured I’d try to do it with her,” he said. “And she beat me, but that’s all right.”
Thursday’s 3.1-mile race attracted more than 1,700 runners to Beaver Lake in Derry, collecting canned goods for local food pantries and raising money to support Derry-area charities.
And while racers say “turkey trots” are popping up all over the place in recent years, runner Sara Brandt of Worcester, Mass., said Derry’s event draws one of the biggest crowds. Brandt completed her second Derry Turkey Trot this year.
“Turkey trots wake you up and make you feel not so bad about eating so much later on, and Derry’s has such a big crowd,” Brandt said.
“I really like the big races because it gets you motivated and pumped up with everyone cheering.”
Carol Ewell of Derry spent the morning serving up chili and potato casserole to runners after they completed the race.
Ewell’s husband, Jim, is the race’s director and she has been involved for many years.
“It used to be only 100 people every year and it just keeps growing,” Ewell said. “It makes us feel great to see this many people coming out to participate and to volunteer.”
When Marge Olson of Lebanon was looking for a turkey trot for her family last year, she said Derry’s event provided a reasonable price and supported a good cause.
“I like that they give food to the pantries because this can be a great fundraiser, and we can all be together,” said Olson, who ran Thursday’s race for the second time with her extended family from both Lebanon and Chester.
The family of 10 all wear handmade turkey hats to set themselves apart.
And while there were plenty of novice runners on scene Thursday, the race also attracts more seasoned athletes like 25-year-old Julia Huffman of Manchester, who was the first woman to cross the finish line with a time of 19:13.
“I grew up in Derry and my little sister and husband also run this race. It’s become a tradition,” Huffman said Thursday. “I run all the time, but it’s still fun to do this on Thanksgiving with everyone.”
Jennifer Connors of Derry brought her daughter, 9-yearold Emily, out for their first race Thursday after hearing about the event around town for several years.
“I thought it would a fun something to do together on Thanksgiving morning, since we’re not hosting this year,” Connors said. “And now I can eat my pumpkin cheesecake guilt free.”