This Street Has Eyes 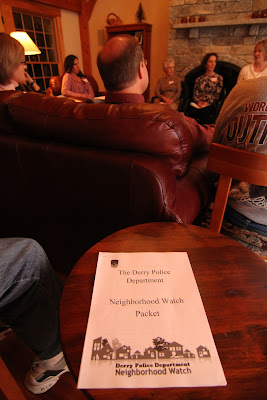 With vandalism and crime on the rise, residents
of Floyd Road are getting organized to take a stand.
By CAROL ROBIDOUX
Union Leader Correspondent
DERRY -- Tom Angelosanto figured the invitation to attend an organizational Neighborhood Watch meeting had to be a sign.“Maybe it was a coincidence, but I got the e-mail for the meeting the same day I realized I’d gone away for the weekend and left my garage door open by mistake. When I got home a few people told me they’d noticed it, but nobody called me — nobody had my number,” said Angelosanto. “Anybody could’ve just walked right into my house. I thought it was probably a good idea to come out and meet my neighbors.”
Angelosanto is no procrastinator. Although he’s lived on Floyd Road for 31 years, he’s one of only a few longtime neighbors left.
“It’s all new people these days,” said Gracie Hrinda, who’s lived on Floyd Road for 36 years. “When our children were younger we knew everyone. It’s a different town than it was — the moms were all home during the day — we even used to go grocery shopping together.”
Last night’s meeting was prompted by a couple of things, said Jean Roaslvig, who hosted the 30-minute organizational get together.
“We thought it would be a good way to get to know our neighbors. And of course, there’s the mailbox thing,” she said, referring to a spate of mailbox vandalism that, by a show of hands, has affected all but one of the 14 neighbors who attended the meeting.
Not only has just about everyone on the street had to replace their mailboxes multiple times over the years, but more recently, several neighbors found their mail had been tampered with.
“The last time it happened to me, someone had taken all our mail, ripped it up into little pieces and put it back inside our mailbox,” said Robyn White.
Roaslvig said another neighbor had actually removed their mailbox after someone stole $300 worth of gift cards from their box — leaving the receipts behind.
Mark Alexander, the newest neighbor with just one year in, has replaced his mailbox already, and had his mail shredded and scattered.
“Now, if I know I’m not going to be home on a Saturday, I go online and use (the U.S. Postal Service) website to have my mail held,” said Alexander.
Roaslvig said she contacted Derry Police Officer Joyce Chadwell a few months ago to find out how to start a watch group. They also wanted a sign to warn the bad guys that someone’s watching.
“She told us we had to organize a group — and it had to be more than the six people who initially came out,” said Roalsvig. So Roalsvig went door to door, gathering phone numbers and e-mail addresses and, with the help of her neighbor, Michelle Convey, managed to rally all but four households to come out for a meeting.
They also purchased two signs — posts sold separately — raising the $119.30 needed by asking for $5 from each neighbor. The signs will be installed by the town.
According to Derry Police Capt. Vern Thomas, the idea of a watch group is to become the eyes and ears of your neighborhood. Police have a series of protocols outlined in an informational packet that residents need to follow if they want to establish a formal watch group. In return, police will provide the neighbors with a list of crimes reported on their street, to keep them informed.
“They have to get involved,” said Thomas, who noted that there are two other watch groups in town, one that has existed on Fairway Drive for several years and a newer one on Kristin Drive.
“We get a lot of calls about starting groups, but there’s not a lot of follow through,” said Thomas. “We will go out and talk to them about how to organize, but typically we never hear from them again.”
During the course of last night’s meeting, Convey went through some of the highlights of the packet, reminding the group that statistically more burglaries are happening during the daytime, when most people are at work.
That led to other topics — like the speeding along Floyd Road, which is a popular thruway for commuters from Hampstead and Chester.
“Morning and evening rush hour is the worst — cars just go flying by,” said Bernadette Giles, a 10-year resident. “We actually moved here to get away from Island Pond Road because of the traffic. Now it’s here.”
Chris Caley said in the eight years he’s lived on Floyd Road, sprawl has brought more new neighbors and lots of kids.
“This is a nice opportunity to get out and meet people, and it fosters communication, which is good,” Caley said.
After the meeting, Maureen Sullivan, who’s lived on Floyd Road for 25 years, said she had come mainly to find out if there had been some specific crimes going on she wasn’t aware of.
“Maybe I shouldn’t leave my car unlocked with the keys in it anymore, and maybe I should be locking my door,” she said, after listening to several of her neighbors talk about their own experiences with burglaries and vandalism.
“I’m glad we’re doing this,” said Sullivan. “I was just talking to a friend in Massachusetts who told me her neighbor’s boat was stolen the other day — and she saw them taking it. She actually waved to the people who were stealing the boat. She didn’t know who they were, or that they were stealing it. They just waved back,” said Sullivan.
“So yes, I think it helps to know your neighbors, and know what’s going on around you,” Sullivan said.