By CAROL ROBIDOUX
Union Leader Correspondent
DERRY – It's National Banned Books Week: Do you know what your kids are reading?
Derry Public Library Assistant Director Diane Arrato-Gavrish hopes so – because parental involvement is a key piece of the literary censorship puzzle.
And yes, it can be puzzling when the annual Top 100 Banned Books list comes out featuring old favorites – along with new ones – that don't immediately register as dangerous or offensive.
That's because a book can be challenged by anyone who feels offended by the content of a character's character – or actions.
Sometimes the offense is actually amusing – like the banning of a 1987 version of “Where's Waldo,” a children's seek-and-find book. Someone noticed that a woman depicted in a beach scene was sunbathing, topless, and an illustrated side view of her bare breast included what looked like a watercolor nipple. The illustration was revised in 1997 to include a bikini top.
Other banned children's books, like most everything written by Roald Dahl for example, have been challenged for being too dark, too serious, too violent, or too out-dated, thus reinforcing negative cultural stereotypes.
So every September since 1992 librarians across the country unite around the issue of book banning and censorship, highlighting books that, regardless of subject matter or genre, are stacked together in the official pile of works that, for one reason or another, have been pulled from library shelves or classrooms.
Often the visual display at the Derry library involves crime tape, brown paper wrapping and peep holes.
“This is unbelievable,” said Kim Severino, reacting to the familiar titles in the yellow-tape draped display, including books like John Irving's “A Prayer for Owen Meany,” “The Diary of a Young Girl,” by Anne Frank and Ernest Hemingway's complete collection of short stories. 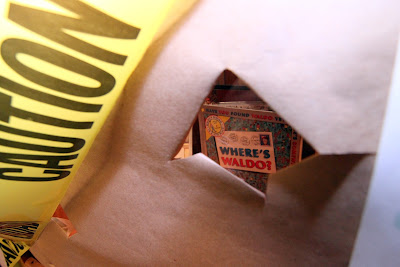 “I'm going to read these books,” Severino said – exactly the reaction Gavrish was going for with her display.
“We can't keep these books in the library – they're flying off the shelves,” said Gavrish. People coming in are astounded at some of the books on the list. Banned Book Week is a good time to reinforce our First Amendment rights.”
Diane Lynch, teen librarian at the Laconia Public Library also serves as chair – and lone member – of the New Hampshire Library Association's Intellectual Freedom Committee. She said librarians are at the front lines of defending the public's right to read anything and everything it would like to read.
“There are some wonderful books by wonderful authors – 'The Chocolate War,' by Robert Cormier, 'The Color Purple,' by Alice Walker, 'Why the Caged Bird Sings,' by Maya Angelou. Some of these books have tough messages, but they are important messages. People have to make individual choices about whether it's time for their kids to be exposed to messages like that, but it's for family's to decide, not libraries.”
Top 10 “challenged books” of the last decade, according to the American Library Association, include “Of Mice and Men,” the “Harry Potter” Series and books in the “ttyl” series, stacking a 1937 classic, a modern fantasy series and a trendy teen collection written text message style on the same forbidden library shelf.
Most commonly, books are challenged by parents who find particular passages of books on assigned school reading lists peppered with language they consider offensive or simply inappropriate for a particular age group. Sometimes, as with the “Harry Potter” series – and more recently, with the “Twilight” vampire series – objections are also raised over religious viewpoints or occult themes. Other repeat offensive themes include books that delve into a character's sexuality, violent scenes, and drug or alcohol use.
In 2009, Campbell High School teacher Kathleen Reilly, who served as curriculum advisor, resigned from the Litchfield School District after parents took issue with books assigned to 11th grade English students.
One of those students, Becca Howard, served as editor of the school's newspaper and is now a freshman at UNH. She maintains that the flap over censorship and her teacher's resulting resignation have left her with some valuable life lessons.
“It's impossible to shelter your kids by banning stories from a classroom of 17 and 18 year olds – it's preposterous,” said Howard. “The woman who initially raised the concerns over the books being read was doing so based on her own moral views of the world. Unfortunately, her morals don't apply to everyone.”
Howard said she has kept in touch with Reilly, who is currently an adjunct English professor at Rivier College in Nashua. Reilly declined to comment for this story.
“Now that I'm in college, I'm being exposed to all kinds of literature – some of it much more controversial than what I read in high school. But those reading lists, and the classroom discussion about sensitive topics that take place, are part of making the transition, from high school to college,” said Howard.
“Parents should realize that a lot of the content considered objectionable is stuff their kids are exposed to every day from TV or movies or music – or life. For example, one of the books, “The Crack Cocaine Diet,” was kind of disturbing, but it sent a strong message about not doing drugs – and it was a much more powerful message than I ever got from sitting in health class,” Howard said.
Gavrish said in the years since Derry has celebrated Banned Books Week with a display, she's had only one complaint.
“One gentleman told me that he believes books should be allowed to be banned, and that we shouldn't be encouraging people to want free speech – I guess he believes some books are dangerous,” Gavrish said. “We go out of our way to make sure we collect books on all sides of any issue, no matter how controversial, so that they are available to the public. Whether you choose to read them is up to you; it's all about having that freedom, and that choice.”