By CAROL ROBIDOUX
Union Leader Correspondent
DERRY – Recruiting Christian “soldiers” to do the good work of the Salvation Army has always been a pivotal part of the international organization's mission, since it was founded nearly 150 years ago.
For Lts. Chris and Kiley Williams, it remains a challenge. They are desperately seeking souls to save – families to engage, youth to serve, a church family to minister to – that can then serve the community, as needed.
“Our Sunday services? There are usually eight of us – six adults and two kids – we are two of the adults, and our two kids are the only kids,” said Kiley Williams.
Stationed at the Derry outpost in July, the couple has spent the summer getting acclimated and looking forward to establishing programs that cater to the community. Church attendance and program participation was minimal before they arrived, and nothing much has changed.
They rearranged the worship space, from cafe-style tables to rows of chairs, trying to create a more formal space. They also moved services up an hour, with Sunday school starting at 10 a.m. and church at 10:45 a.m.
“People seem to forget – or maybe they never realized – that the Salvation Army is first and foremost a church. We want people to know we're more than just a place to get used clothing,” said Kiley Williams, referring to the daily “fill a bag for five bucks” clothes closet, which is free and open to the public.
Although their basement is loaded with racks of clothing and donations are dropped off regularly, few people come to take advantage of the service.
Shortly after the Williamses arrived, the Salvation Army was looking for a new location – something smaller. But just a few weeks ago, they renewed their lease at the highly visible Folsom Road building that has been the Army's home for a decade.
In addition to office space, they have a huge out building, used for worship and equipped for fun – the second floor includes an open space with an air hockey table, bumper pool, a slew of board games, a preschool area with an easel and play kitchen – there is even a bouncy house that can be set up.
Downstairs there is more office space – Kiley Williams said she'd love to give free music lessons to anyone interested in playing a brass instrument. There is a nursery in progress and plenty of room outside to roam.
“Maybe we need to change it up, try running more of a 'seekers meeting' rather than a formal Sunday service,” said Kiley Williams, although with only a handful of worshippers, Sundays are pretty informal.
“We give them notebooks, in case they want to take notes and ask questions afterward, but a lot of the time they'll ask questions during the service, if there's something they want to know. It's a welcoming, friendly atmosphere, but we'd like to have the seats full on Sunday,” said Kiley Williams.
They know everything is possible – with the right mix of community support and direct outreach – that's what turned things around at the Salvation Army outpost in Haverhill, Mass., according to Lt. Jeff Hardy, who has been stationed there for a little more than a year with his wife, Mari.
“When we got here, we had about 30 regulars on Sunday and zero youth in our youth program. Now, we have more than 100 kids who come regularly, and our Sunday congregation has doubled, said Hardy.
He said it was a concerted effort – tapping the existing group of “soldiers” – that's Salvation Army lingo for congregants – and relying on our advisory board to make phone calls, go door-to-door and work on building a core group of families.
“You need to focus on families. If you just target kids, or adults, you're missing part of the bigger picture,” said Hardy.
Manchester Salvation Army Capt. Shaun Belanger said he, too, struggles with building a vibrant congregation. He and his wife, Kimberly, are also newly planted in this longtime city outpost, which is known for it's thriving Kids Cafe after-school program, which serves a hot meal to more than 100 kids nightly.
Sunday services are still a struggle.
“On a good Sunday, we might have 30 people,” said Belanger. 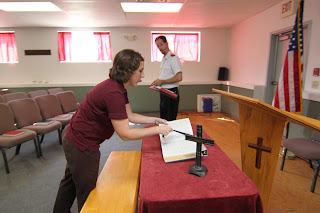 Derry Chief Financial Officer Frank Childs has served on the Salvation Army advisory board for years. He said the board has already have begun working with the Williamses at extending the Army's reach into Londonderry and Windham – an underserved area of the Greater Derry Salvation Army's territory.
“We met a few weeks ago with both town managers of Londonderry and Windham to talk about our outreach, and identify some people there to bring onto our board,” said Childs. “While there are clearly needs in Derry, those communities also have needs – even though the perception is that there isn't the same kind of need.”
Ideally, adding another four or five members to the existing 10-member board can only help bring fresh ideas and connections into the mix, Childs said.
“The Army is known for its social service outreach, but its founder, William Booth, left the Methodist church to start a street mission, movement after feeling like those who really needed to be served by the church weren't being served,” said Childs.
“When you say it's a Christian evangelical church, people are surprised,” said Childs. “But that is the Salvation Army's primary function. It's a matter of finding the right mix. We're working on that. You know what the magic is when you find it – our real goal is getting families involved in the church,” said Childs.