By CAROL ROBIDOUX
Union Leader Correspondent
DERRY – Once again, there will be something for everyone at the town's surplus auction, which coincides this year with Derryfest, on Sept. 18. 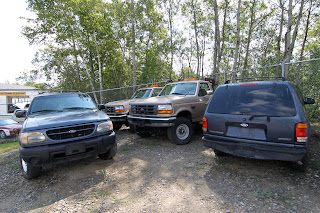 Highlights of the auction include four vehicles retired from Public Works fleet of trucks and SUVs – two 1997 Ford F350 pickup trucks with Minute Mount plows, and two 2001 Ford Explorers.
Paul Noe, the town's chief mechanic, said none of the vehicles are problem-free.
“Both Explorers need rust repair – that's the biggest thing about our vehicles, is that they work through the salt,” Noe said.
One of the trucks needs a brake line, and the Explorers might need more in repairs than they are worth to fix, and best used for spare parts, Noe said.
One of the trucks has about 110,000 miles and the other, about 80,000. The Explorers each have about 70,000 miles, said Noe.
Beyond the four-wheeled items, there are plenty of bicycles that will be up for grabs, most of them in decent shape.
“We do have a storage issue – say we get a bike the day after the auction. It's going to be chained up outside for a whole year until the next auction because we don't have anyplace else to store them, so naturally they're going to suffer from being exposed to the elements,” said Barry Charewicz, who is the Police Department evidence room clerk.
He said there are assorted goodies locked up in the storage shed and ready to go, and some items still coming out of the evidence room that need to be labeled, but he gave a sneak preview of what was ready so far.
“Here's something a little different,” he said, pulling a wood-faced bass guitar from behind a stack of boxes. There are also plentiful plumbing supplies, video games and tools – some stolen, some used to break in to homes – all of it abandoned, forfeited or impossible to match with a previous owner.
“These auctions are probably going to phase out over the next few years,” said Charewicz. “It's nice to have these items available to the people in town, but it's hard to justify the expense of the manpower needed to prepare everything.”
He said many police departments are turning to online auction site www.propertyroom.com, where items that end up in police custody can easily be sold, eBay style, to the highest bidders from anywhere in the world.
“It's a huge advantage – they pick up the items and do the selling online, and then they cut us a check for a percentage of whatever they make selling it,” said Charewicz. “These local police auctions will be a thing of the past.”
Last year the town made $6,569 on auction items – the bulk of it coming from the sale of Public Works items, which netted $3,810. Police surplus accounted for $1,169, with the rest divided between the Fire Department and Cable 17.
The town surplus auction is held behind Derry Police Headquarters, and starts at 9 a.m. sharp. Items will be available for viewing about one hour in advance. Capt. George Feole said a complete list of auction items will be posted on the Police Department's web site by next week. For more information, contact Feole at 845-5623.