Think it's hot? Imagine how a pet feels inside a car 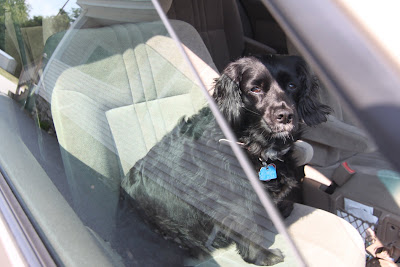 By CAROL ROBIDOUX
Union Leader Correspondent
DERRY – Another fallout from this late summer heatwave is a familiar pet faux pas that has Animal Control Officer Marlene Bishop a little hot under the collar: people leaving pet in hot cars.
On Tuesday at about 11:15 a.m. Susan Churchill of South Avenue was charged with animal cruelty after her dog was left in a car outside the Overlook Medical Center for more than an hour.
“It was her second offense. I had given her a warning back in May, but she turned around and did it again. What she didn't anticipate is that the animal control officer from Hampstead had an appointment there at the same time. She's the one who reported it,” said Bishop.
Officer Dale Childs of Hampstead notified police, who confirmed that the dog had been left inside the car unattended. The temperature outside was 91, said Derry Police Capt. Vern Thomas.
“People think they're doing the right thing by bringing their pet along for the ride – and we're talking here about otherwise respectful pet owners. But you put your dog in the car to run errands, and maybe you are even prepared with having water, but things happen. You get stuck, or side tracked. The result is that we run into these situation, where an animal is in jeopardy,” Thomas said.
A second report of a dog left in a hot car was made to police Tuesday, this time at the Tractor Supply Company in the Hood Plaza, just before 6 p.m. In that case, the responding officer noted that the dog had water and the car windows were left open about an inch, but Bishop said even that isn't good enough in especially hot or cold weather.
“It can be 70 degrees out, but a car in a parking lot sitting on blacktop in the sun can get up well over 100 degrees in minutes – and it takes only about 20 minutes for a dog to develop brain damage,” Bishop said. “In the case of the dog left Tuesday, I put the dog in my van to cool off, and she was fine. But if it had been more humid outside, she wouldn't have survived.”
As an experiment, a thermometer was left in the backseat of a minivan for three hours yesterday between 11 a.m. and 1 p.m., and the temperature was logged at intervals of 30 minutes, 45 minutes and one hour.
Between stops, the air conditioning cooled the van down to a low of 77 degrees. But the result of each test was that the mercury quickly climbed to 95, 100 and 108 degrees. In each test the windows were left open between 2 and 5 inches.
Despite what common sense might dictate, Bishop said she's seen too many dogs left in cars this summer – and that's just during her weekday shift. She is certain it happens even more on weekends, or evenings.
Routinely she issues a verbal warning when she finds pets left in cars, and also hands the owners a copy of the law – RSA 644:8, which details animal cruelty, and includes the fact that police have the right to do whatever they deem necessary to rescue an animal.
“What that means is it allows us to smash a car window to save the animal, at the expense of the car owner,” said Thomas. In addition, if the animal is taken into custody, the pet owner would also have to pay to retrieve their pet and pay whatever other costs were incurred.
Churchill was charged with a misdemeanor and given a summons in lieu of arrest, said Thomas, which means it will be up to a judge to decide if she was acting negligently and if so, what the penalty should be.
Although there are no national statistics on the number of deaths attributed annually to dogs left in cars, the Humane Society estimates hundreds of dogs are killed each year simply because they were left behind by an owner who just didn't think.
“I know people love to take their dogs along, especially knowing their dog loves to go for car rides. But you have to use human judgement because, nine times out of 10, it's the dog that's usually running the show, and they don't know what's best for them,” said Bishop.