By CAROL ROBIDOUX
Union Leader Correspondent
DERRY – After months of digging an mulching and watering and hovering, 9-year-old Sareenah Spirdione finally got to enjoy the fruits of her labor.
“The tiny strawberries were so sweet,” said Sareenah, who also learned to love eggplant and made her peace with radishes – which were plentiful this growing season in the Greater Boys and Girls Club community garden.
“Gardening was a lot harder than I thought it would be, but it was worth it,” said Olivia Hayes-Rozen, 9, who also fell in love with the bite-sized miniature strawberries.
Beyond bearing witness to the miracle of nature, where a crusty seed the size of a pin head transforms into a juicy red tomato, the girls were excited to be on hand for yesterday's Harvest Dinner Tasting, a mini meal made up of dishes from all the crops grown by the kids, including mashed Red Norland potatoes, warm Harvard beets, glazed carrots, fried green tomatoes and zucchini bread. 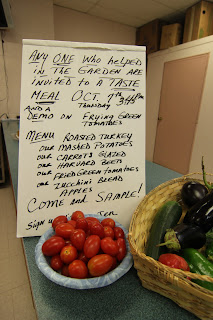 Boys and Girls Club Director Art McLean did the honors, carving up a 21-pound turkey – just an aside to the main course -- vegetables. But altogether, the unmistakable smell of Thanksgiving permeated the clubhouse.
“We grew everything but the turkey,” said Derry Garden Club member Blanche Garone, who has been instrumental in bringing the garden project to the recreation center two years in a row, teaching the kids all about how to garden and compost.
This week's lesson was on how to twist a zucchini just so, dig a potato from the dirt, and know when a tomato might be too green or pock-marked to translate into a tasty fried side dish.
Garden Club recruit Jean Arsenault Roalsvig was in charge of frying tomatoes, after spending the morning searching the Internet for tips and techniques.
“I'm going with egg whites for dipping and cornmeal for coating,” said Roalsvig, after learning that utilizing yolk can produce a soggy crust. “I actually saw a recipe that called for dipping in milk then flour then egg then cornmeal, but I'm all about simplifying, so I combined the egg and milk in one dish, and the flour and cornmeal in another.”
As Roalsvig and her daughter, Emma, tag-teamed tomatoes, Garone gave a group of kids a steamy lesson in spud mashing, which quickly led to children lining up for plates and hitting the assembly line for a petite helping of nature's bounty, a delicious lesson in the true meaning of reaping what you sow.
Although the original idea was to keep the dinner crowd limited to those 30 kids or so who worked on the project, start to finish, yesterday when the smell of fried tomatoes hit the air, everyone admited to having picked a pepper, or two.
“I think we'll have just enough,” Garone said.