Londonderry: When his longtime employer
went bankrupt, Mert Stowell found the perfect way to reinvent himself.
By CAROL ROBIDOUX
Union Leader Correspondent
Mert Stowell’s life might have gone differently had St. Johnsbury Trucking Company not gone bankrupt in 1993.
“I had worked there for 24 years and 11 months, and figured I needed about six more years before retiring. Then, they shut down,” said Stowell, of Londonderry.
Both he and his wife had been longtime employees, working together at the Manchester plant, and were among more than 4,000 employees across New England left dangling by the abrupt closure.
It was the kind of job you settled into and stuck with till you were ready to call it a career.
Stowell had no choice but to reinvent himself at the age of 53.
He had no backup plan, except that he’d spent 20 years of his life tinkering with old lawn mowers.
“It was just a hobby that I started with in 1971, mostly buying old push mowers and utility trailers, fixing them up and selling them,” said Stowell, who turns 70 next month. 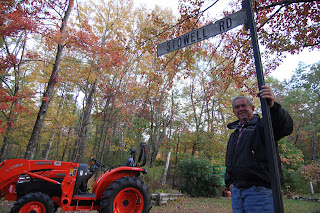 “After the plant closed, I looked at my wife and said let’s see if we can make this work, and we have,” said Stowell, whose fleet of fixed up lawn mowers, tractors, snowmobiles, four-wheelers and utility trailers creates an eye-catching display along Mammoth Road. Many days people just drive up and start window shopping — weekends are nonstop.
“A lot of these come to me in perfectly good condition, but people want to sell them because they’re moving away or something, and they don’t know what else to do with them,” said Stowell, who is the unequivocal tractor king, based on sheer volume of used machines he has for sale on his property and in storage.
“My son, Brian, helps me out with the business now, and I hired a couple of guys who work in a garage out back,” said Stowell, who never met a lawn mower he couldn’t salvage.
“The problem with most of them is a lack of proper maintenance. If you take care of them, they should last,” said Stowell.
He has noticed an uptick in business in the past year, and attributes it to the economy.
“More people are buying used stuff rather than new because of the economy. My sales this year were up,” said Stowell, leaning on an old road sign along his extended driveway that bears his name.
“Oh, that? A friend of mine was working for the town of Bedford when they were replacing all their old signs, and he asked me if I wanted one that said Stowell Road, so I took it,” said Stowell.
He doesn’t advertise, and he stands behind every machine he sells — a point of good oldfashioned pride in a job well done.
“You buy a lawn mower today at Home Depot, but they don’t service it if you have a problem. I’ll fix anything. I get a lot of business because people know I take trade-ins, and I service what I sell,” said Stowell.
“This isn’t what I thought I’d be doing with the rest of my life. I had no idea that St. Johnsbury was going under. Back then, I was just hoping to get to retirement,” said Stowell. “But I enjoy having my own business and being my own boss. I am always keeping busy, and I have no plans to slow down.”