By CAROL ROBIDOUX
Union Leader Correspondent
CHESTER – Rob Robillard used to be a circuitry salesman. But he was inspired to do something completely different after learning how much Icelanders love their home grown moss-flavored schnapps. All things being equal, he figured if people can get behind a beverage that tastes as bad as it sounds, how hard would it be to sell New Englanders on a smooth new whisky product infused with maple goodness?
That was more than a decade ago, and since then, Robillard has learned a lot about building a whisky empire from humble cottage industry beginnings.
For one thing, making whisky in your basement and selling it to your friends and family is the long road to success. 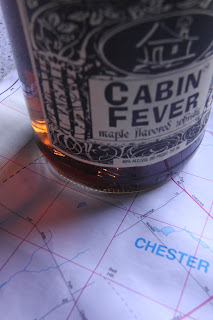 “From a high-volume standpoint, the town wouldn't let us turn this into a high-volume facility, so it came down to focusing on marketing and sales rather than production,” said Robillard.
He made the tough decision to move the bottling operation to Paramount Distillery in Ohio, which last year produced 20,000 cases of Cabin Fever whisky just to keep up with demand.
The previous year they sold only 8,000 cases.
“We'll sell 3,000 cases in New Hampshire alone this year, and that's a conservative estimate,” said Robillard, 44, from his backyard sunroom which sits atop the basement distillery where his whisky-fueled adventure first took shape.
As soon as Robillard can figure out how to ratchet up production to 50,000 cases, he will be ready to seriously consider moving the entire operation back to New Hampshire, creating jobs and reinforcing that sense of homegrown pride that first inspired him to give up his day job as a national sales manager for an electronics company.
“I've already been up north looking at property in the Lebanon/Littleton area. Right now Cabin Fever is distributed in 15 states. People tell me there's a phenomenon called 'the tipping point,' the point at which your brand becomes socially acceptable and just spills over. So you may fight to get your sales to 50,000 cases and, all of a sudden, sales jump to 250,000 – they say once you reach the tipping point, the rest just happens all by itself,” Robillard said.
Maybe so – but not without a well-crafted prelude to success.
What started in his homemade still – a pair of lobster pots welded together and some brass pipes used to cook up 2.5 gallons of smooth maple whisky – has grown into an unexpected success story. Robillard and his brother, John, and their wives Melissa and Julie, are all equal partners in what remains a side business – at least until Cabin Fever maple whisky reaches the next sales milestone.
“The trick is to be prepared for anything – which includes being prepared in the other direction, so we won't be living under a bridge,” said Robillard, who insists he's no more remarkable than anyone else who ever had a taste for whisky and a big idea.
“Right now I'm just hoping to get my muffler fixed – that's where I'm at,” Robillard said.
“I used to travel a lot for work, and I personally saw the entire circuit board industry go overseas. While I was traveling around Eastern Europe, I got to visit a distillery where they were making pear brandy, and I got interested in the process. I got into the habit of collecting a spirit from the different countries I visited, and found that often they were flavored with a particular local fruit or product,” Robillard said.
Which is why he the moss-flavored schnapps sunk in.
“Icelanders were extremely proud of their product, and in talking with some of my colleagues abroad, someone said, 'Hey, you guys are famous for maple – how is the maple whisky? That's when I realized maybe someone needed to work on that,” said Robillard.
From there, things began to take shape. Robillard started to learn about distilling, and decided on a rye mash for his base. He went to Flagstaff, Arizona, to get his master distiller's license. He took some federal courses on navigating the liquor industry. And he sampled a lot of alcohol, with much help from his friends and family to get the recipe right.
“It wasn't all hard work,” said Robillard, who credits his entire extended family for taking ownership of the carefully crafted taste and down home marketing campaign that seems to be propelling Cabin Fever to the next level.
When looking for a way to up the ante, Robillard sought a more local bottling operation, but finding someone to get behind a new product is tough. He recruited his dad and uncles for a marketing campaign – not only to save money on the cost of advertising, but to reinforce the authenticity of his brand.
“People who are fanatical about being a local product will call us out on being bottled in Ohio, but to remain viable we had no choice – it was the only way to put the product on the shelf at a reasonable price,” said Robillard.
He is a stickler for quality, and uses only Grade B dark maple syrup, which he orders from a Vermont maple co-op – there was no comparable cooperative in New Hampshire.
“There's nothing boutique about our product – it's just a high quality whisky in a no-frills bottle, barrel aged and chill filtered, to reduce the sugar content,” Robillard said.
Their smooth maple spirits have won top honors two years in a row at the regional Julio's Liquor Whiskey A-Go-Go held in Massachusetts, giving them the courage to participate this year in Whiskey Live 2010 in New York.
“How'd that go? We had distributors fighting over our brand,” said Robillard.
His wife still works full time, but Robillard has Cabin Fever fever, a round-the-clock mission that means putting 100 percent of his profit share back into marketing.
“That's what gets me out of bed in the morning, the idea that this might just happen,” Robillard said. “There are some people in the industry who are convinced Cabin Fever will be a national household brand – if I can do as well in about 20 states as we're doing here, I'll be shopping for boats instead of worrying about my muffler,,” Robillard said.