Pinkerton counselors go all out for students at Halloween 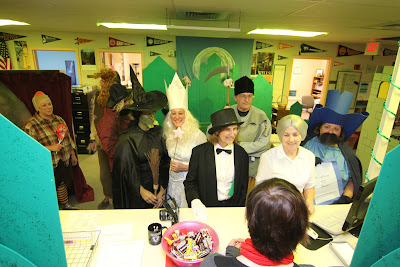 By CAROL ROBIDOUX
Union Leader Correspondent
DERRY -- “Next,” said Bridget Detollenaere, from behind the guidance reception desk, dressed as the Mayor of Munchkin City. Flanked by John Chappell as the Cowardly Lion, Lisa Rezaee as the Wicked Witch of the West, Julie Maher as Glinda the Good Witch of the South and Jan Deleault as the Wizard of Oz, Detollenaere was conducting guidance office business as usual Friday, all things considered.
Dressing up in a particular theme each Halloween has become the calling card of Pinkerton Academy's guidance department, a trend that began a few years ago which has extrapolated into a spectacle of epic proportions – to almost everyone's delight.

“There are a few people who don't participate, and that's OK,” said Charlene Westervelt who is largely responsible for the elaborate ode to Halloween,
“Props, scenery – I come up with it all, in my head, but my husband Geoffrey makes it happen – he's a carpenter, and teaches at Nashua High School. I tell him what I envision and he builds it,” said Westervelt, dressed up as the coroner of Munchkinland. 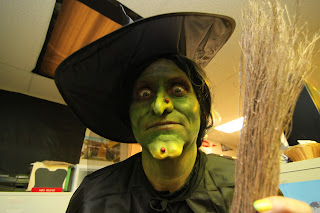 In past years they have been pirates, dressed around a circus theme, explored their inner farm animals, and last year, celebrated Green mythology.
“As we were getting ready for last year, someone came up with “Wizard of Oz,” for next year – and we already know what we're doing next year – Hard Rock Cafe,” said Westervelt. The props don't go to waste, either. What doesn't get donated to the school's drama department finds a good home elsewhere.
“The Parthenon my husband made for us last year was donated to a teacher who teaches mythology at a Nashua middle school,” Westervelt said.
She coats her reluctant bushy black mustache with another layer of glue stick and reattaches it to her upper lip as she explains how a woman who hates Halloween can justify such over-the-top frivolity.
“We deal with some tough stuff in here, and it gets tougher every year, everything from boyfriend-girlfriend breakups, anxiety, family issues, depression – in fact, you may not realize this, but while everyone was out there posing for photos, I was in here dealing with a suicidal kid,” said Westervelt.
Those momentary juxtapositions of life happen every day, even on days reserved for holiday fun, where a room full of munchkins have no power over a teenager who's lost in a haze of hopelessness.
Westervelt and the rest of the guidance staff are trained for just such moments. They are lucky when a distraught student, down to his last thread of hope, finds his or her way to a place where caring adults, no matter how they are dressed, are ready to listen, and to help.
And she suspects it's why the themed Halloween celebrations have taken on a life of their own – it has become a tradition here, a way to gel the guidance department as a team, reinforcing the camaraderie that is so necessary to keep going despite the difficult emotional work they are often faced with.
“It really brings us all together,” Westervelt said.
It also draws students, mostly out of curiosity – and of course, for candy.
Haley McDonald followed the yellow brick road leading from the hallway to the guidance office, past the miniature tornado and the shriveled legs of a witch gone wrong, where she was met by Dorothy Gale, who led her through the Emerald City and into her office, for a chat.
“I knew they were decorating for Halloween, but I didn't expect this,” said McDonald.
Her guidance counselor, Kate Ledoux, was in full Dorothy Gale regalia, right down to the ruby slippers and picnic basket with a stuffed Toto.
“It's cool – it's really awesome that they do all this,” said McDonald, smiling at her guidance counselor's getup. “It makes you feel good when you see how much effort they put into making Halloween fun.”