Hall Finally Leaves the Roaring '20s, Thanks to Renovations 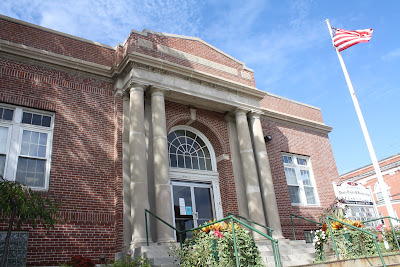 Derry: Updates will make Veterans Memorial Hall warmer and more efficient.
By CHELSEY POLLOCK
Union Leader CorrespondentDERRY — In its 82-year lifespan, Veterans Memorial Hall has seen few major updates. But by Thanksgiving, workers will have completed what town staff say are much needed improvements to the landmark.
“The heating system was desperately in failure,” said Derry Public Works Director Mike Fowler. “There were days last winter where we had a very difficult time keeping the heat above 57 or 58 degrees.”
But that forced air heating system will be replaced this fall with a radiant heating setup in the gymnasium, which will use a collection of heating panels on the gymnasium walls to warm the space, Fowler said. Radiant heating warms objects and people rather than just the air, he said.
Workers are also installing efficient windows and doors, reinforcing the building’s roof, putting in new insulation and replacing some of the bricks and mortar that need repair after more than 80 years in place.
“Not everything in the building is 1929 era, but the main elements like the woodworking and the brickwork is essentially from 1929,” Fowler said. “And we’re trying to match everything to what’s already in place.”
Altogether the project will cost about $278,000, Fowler said, with $133,200 coming from a federal stimulus money through an Energy Efficiency Community Block Grant and $145,000 from a town fund initially intended to replace the building.
“Given the economy and some other factors involved in getting a new building, we decided we were going to put the effort into rehabilitating Vet Hall and the Town Council agreed,” Fowler said. The council voted to contribute to the renovation project in April, he said.
A critical part of earning that federal stimulus funding was guaranteeing the project would increase the building’s energy efficiency by 20 percent. But Fowler said he expects to see savings of more than that minimum.
“Every little bit is going to add up, but we would hope that when all is said and done that we’d be in the high end of the 30 to 50 percent range,” he said.
Before renovations, Fowler said, Veterans Hall used between 4,000 and 4,500 gallons of heating oil each year. Cutting that usage in half could save the town about $5,000 per year, he said.
“We’re very excited,” Fowler said. “Already the structural upgrades look very good, and I think the patrons that use the building are excited to have a warm building this winter.”
With a full roster of classes like line dancing, tai chi and a senior walking program, Derry Parks and Recreation Director Eric Bodenrader said the space is well used even in the cold winter months.
“We’re pretty booked solid with a little bit of downtime to clean,” Bodenrader said. “This will definitely enhance our programming because the building itself hasn’t been energy efficient, and the heating was antiquated. Making a warmer space will definitely be a positive thing.”
And that heat will be much appreciated by residents attending the Derry Farmers Market, which will move inside on Nov. 7.
The market, which just got off the ground this summer, is set to occupy the Veterans Hall gymnasium from noon to 4 p.m. on the first and third Sunday of the month through March.
“We will still be carrying about all the vegetables you can purchase in the summer because some of my new vendors actually have greenhouses,” said market director Beverly Ferrante. “With your beets, radishes, lettuce and tomatoes, we are going to have quite a cornucopia of vegetables available.”
And though Veterans Hall is not yet ready and the summer market is still running — with an Octoberfest-themed final day on Oct. 13 — Ferrante said she’s hard at work preparing for November.
“I don’t have a vision right now of opening the doors on the first day and how filled it will be,” Ferrante said. “We’ve still got to market it, and my good old electronic signs are going up again, but people have already started calling me.”