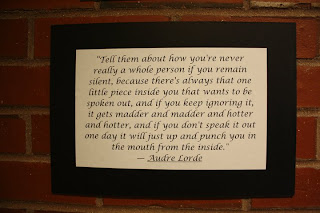 DERRY -- It all started as a doodle in her sketchbook, but Pinkerton Academy senior Alexa Trafton said she hopes her now large-scale paintings will find a bigger purpose in raising awareness about sexual assault.
“I want these to make people stop and think,” said Trafton Friday. “I want it to get as big as possible so it can speak to people who have gone through this to say that there’s someone out there trying to make a difference and being supportive of the recovery process.”
In September, Trafton was asked to create a few pieces to display as part of an exhibit for her art portfolio design class. But Trafton said she wanted to make a difference.
“I feel like if I have that kind of meaning behind my work, then it’s worth putting that time and effort into what I’m producing,” said Trafton. “If I don’t have that, then it doesn’t mean anything to me and I don’t like that feeling.”
And after a discussion with a close friend who had been sexually assaulted on a vacation several years ago, Trafton said she wanted to use the project to bring awareness to the issue and encourage others to seek help.
She calls the project “Let Me Hear You Speak.” “There are people out there who suffer something like this, but they don’t go for help,” she said.”It took my friend a while to go get help for this, and I decided I wanted these paintings to help people find their voice.”
The first painting, called “Help,” is a large exclamation point, which Trafton said is meant to encourage people to ask for help. The idea came from a small doodle she made in a sketchbook, which she and art teacher Wendy Root thought could have a bigger impact on a larger scale, Trafton said.
“Why?” is her second installment, a large question mark that she said symbolizes the struggle people go through in understanding why the assault happened.
And while the first two panels will hang in the lobby of the Stockbridge Theater at Pinkerton Academy through January as part of the art department show, Trafton has hopes to continue with the project beyond the semester-long course. She will add a third painting called “Hands of Hope” to the collection in February.
And this time, Trafton said she wants help.
The painting, which she plans to complete by February, will be made up of the hand prints of her friends and classmates on a large canvas, each containing supportive quotes for assault survivors.
Moving forward, Trafton said she hopes that other artists will produce their own ideas.
“I don’t want to be the only one who’s doing this,” she said. “If someone has an idea that they want to do, I will definitely look at it and we’ll figure out how to put it up as part of the project.”
Anyone interested in participating in the “Hands of Hope” piece or in contributing a work of their own may contact Alexa Trafton at arts.aht.9896@gmail. com