Fortunate K9 owner is set to tour Europe
with her band this spring.
By CAROL ROBIDOUX
Union Leader Correspondent
DERRY -- Yes, her earliest musical influences were a brimming bowl of 1970s punk rock soup — Nina Hagen, The Gun Club, Nick Cave, Black Flag, the Damned.
But with a little help from her older siblings, Julia McDonough was also probably one of the few and privileged 8-year-olds growing up in Weymouth, Mass., who enjoyed a healthy appreciation for punk served up with a side order of Frank Zappa, all kinds of bluegrass, and even some classical.
It has all left her with an insatiable appetite for good, hard-rocking, melodic, meaningful music, and a life that keeps getting better all the time. 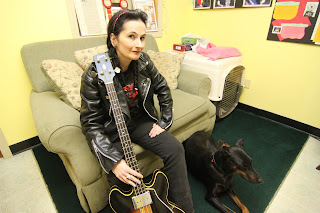 “Sometimes it’s hard to talk about my early influences, because the music is so much a part of me,” said McDonough.
“Music and dogs have always been the big theme for me, the two things that supported me, emotionally. Like, I always knew I’d be a musician someday, and the dog thing has always been what gets me up in the morning. The dream come true, for me, is that today I’m doing both.”
Many years and many adventures later, well beyond her kid punk roots, McDonough is thrilled to be reviving her inner musician. When she’s not spreading the gospel of good dog ownership as dog trainer extraordinaire at her downtown business, Fortunate K9, McDonough is prepping for her first European tour as bassist for The River City Rebels.
“I really don’t like to put labels on what we play.
Someone might want to call it punk, but after you listen to it, you’d think differently. Some reviewers have compared us more with Springsteen,” said McDonough, who was hired to play with the Upper Valley- based band, rounded out by Dan O’Day on guitar/vox, Brandon Rainer on keyboard, Rob Castellon on drums and Sara Stovall on violin.
Although she will try to tell you her life is “like a Mexican soap opera, boring and incomprehensible,” her journey from adolescence to adulthood takes on some colorful twists and turns as she found her way from Boston to Philly to Austin and back, playing in several different bands with some tangible successes along the way.
For as long as there has been music in her world, there has been her devotion to dogs.
At the age of about 12, Mc-Donough started attending the Weymouth Dog Training Club to master the art of dog training, obedience and competition. A short time later she started working with clients and has never stopped.
“It also made me even more of an outcast at school than I already was,” said McDonough, who found comfort in the hardcore music scene in and around Boston, which somehow reflected the complexities of her teen years.
She didn’t pick up a bass guitar until she was already well entrenched in the local punk scene, but found that her years of absorbing the rhythm and flow of such a variety of music made her a natural performer.
Feeling tapped out by the club scene, McDonough abandoned her music in the late 1990s and made her way to New Hampshire, refocusing all her energy on dogs. She accepted a position as training director for Doberman Rescue Unlimited, which she continued until 2005. In that time she established DRU University, a shelter dog program that served as a model for other rescue groups around the country.
During her time with DRU, McDonough met fellow trainer Rick Froton, and they eventually established Fortunate K9 as a way to bring their shared philosophy on dog training — which mainly involves owner training — to the masses.
Today they remain partners in work, music and love.
“Actually, Rick is the one who connected me with the River City Rebels. He’s a bassist, too, and he knew they were looking for someone, so he told them he knew someone he thought might be a good fit. I auditioned and, to my surprise, I got the gig,” said McDonough.
She just got back from a 10-city River City Rebels tour that included Lansing, Mich., Buffalo, N.Y., and Pittsburgh, Pa. April’s two-week European tour is taking her beyond her wildest dreams, to Germany Belgium and beyond.
“I’ve barely been to Canada, and now I’m going to Europe as part of a band? It’s insane.
Our last show is in Paris,” said McDonough. “It’s also gratifying. I love the band, and I wish we could play more locally, but we’re all over the place some of them are from up north, another guy is from Jersey, and our fiddler is from Florida.”
Through it all, there has been no real separation for her between her love for dogs and her love of music.
“In my mind, they complement each other. When I teach people how to work with their dogs there’s a rhythm and a logic that goes along with it — it has a corollary to music for me.
Dog training is a kind of performance,” McDonough said.
“And then, when you are working with dogs — who are these wonderfully simple creatures who live in this beautifully black-and-white world — and they wear it on their sleeves, so to speak; that’s kind of how it is for musicians, when you’re playing music and living in that moment, and you win a crowd over, you learn there are consequences for your actions. If you’re playing with sincerity, people get it,” McDonough said. “At least that’s how it works in my mind. The two worlds mesh. It’s a perfect balance.”