All fired up at The Halligan Tavern 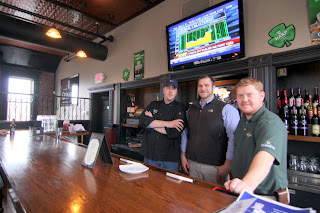 DERRY – It's only fitting that people are getting all fired up over The Halligan Tavern, the town's newest watering hole.
Since opening its doors about a month ago, the former fire station turned multi-level restaurant has racked up more than 1,000 Facebook fans, adding some much-needed edge to the downtown vibe.
Most recently, the space was occupied by another firehouse-themed restaurant, the Firehall Pub & Grille, which closed abruptly in 2007 after a protracted dispute with neighbors over parking, noise and other issues.
In naming the place, consideration was given to the building's history as Derry's former central fire station – a halligan is a 20th-century fire fighting tool, first adopted by Boston firefighters in the mid-1940s.
“We did some research after we bought the place, and decided to keep the fire house theme,” Moran said. “Then we gutted the whole place.”
The resulting “gastropub” is what happens when three guys go beyond just dreaming a dream. Owners Tim Moran, Dan Mancini and Ryan Tobin say they found just the right place to execute their business blueprint, one hatched years ago during late night shifts Peddler's Daughter in Nashua, where Moran's served as bar manager, and Mancini and Tobin were his bartenders.
“We've been in business together for 15 years, and when this opportunity presented itself, we knew it was time to pull the trigger,” said Moran who, at 33, has seniority among the management team.
What might seem like a risky endeavor in this recovering recession economy has really come together at the perfect time, says Executive Chef Don “Junior” Erickson, recruited by the partners from Surf Restaurant, down the street neighbor of Peddler's Daughter.
“We aren't here just for the sake of filling space. We want to do something no one else is doing – great bar, great food with a great atmosphere,” said Erickson.
“Restaurants closing their doors right now are doing something wrong, whether the food's an issue, or the service is an issue. We feel strongly that if you put the right food, service and people together, things work,” Moran said.
So far, it's working. Business has been steadily increasing, mostly based on word of mouth.
Tuesday is Team Trivia night. Friday and Saturday is reserved for live music. Beer specials during Red Sox games are a given.
“Not one of our entrees is more than $20 – and that includes our one-pound rib eye,” Erickson said.
Emphasizing fresh food fare is part of what they hope will put them on the map of top-notch New Hampshire eateries, said Moran.
“Everything we serve is made from scratch. We make our own bread, we grind our own meat. Not one dish outshines another, because they're all special,” Moran said. “But if you ask me, our Reuben is probably our signature dish.”
Family-friendly price points and a comprehensive kids menu should make their restaurant an affordable alternative to eating in. However, catering to a younger after dinner crowd is a huge part of the business plan. They will be Twittering daily specials and continuing to encourage a Facebook buzz they expect will boost business through social media outlets.
“Between the trivia and the entertainment, we're looking for that crowd that's out after 10 p.m. And we have a $5 late night menu that we serve till 12:30 a.m. that includes a homemade breakfast sandwich,” Moran said.
Mancini said it is everything he'd hoped it would be – and more – to have his own business. Going to work every day still feels like an adventure.
“We totally have a sense of pride about the place. It's ours, and we've worked for it,” said Mancini.
Erickson said they aren't the least bit hopeful that things are going to take off at Halligan's.
“This isn't about hope. That's what you do when you aren't sure about what you're doing,” Erickson said. “Between the four of us, we've opened something that's a guaranteed winner. It's not a question for us. Give people a great meal at a cheap price, add an assortment of 24 beers, and then just before you leave the bar for Denny's, you find out you can get a fresh breakfast sandwich, to go? You can't ask for anything more.”

Email ThisBlogThis!Share to TwitterShare to FacebookShare to Pinterest
Labels: The Halligan Tavern