Union Leader Correspondent
DERRY – With two new members seated following last week's election and Monday's recount for District 2, the council last night settled in and worked through some growing pains, electing a new chair and engaging in some healthy debate over general procedures before getting down to the business of the night. 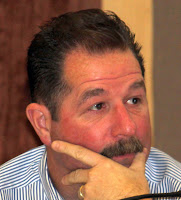 BENSON
Councilor Brad Benson was unanimously voted in as chairman, and quickly set a cordial and efficient tone for the meeting.


Most of the debate last night was focused on renewal of the town's intermunicipal ambulance service agreements with Chester and Auburn.

Town EMS Director Chuck Hemeon said Derry has been providing services to its neighboring towns for more than 20 years. He made an initial presentation to the board on the proposed three-year contracts. Hemeon said the base fee of $47,250 was negotiated at a 5 percent increase over last year and would go up by an additional 5 percent each year over the next two years.
Derry also collects an additional transport fee, billed directly to patients. Last year, the total revenue for Derry from both towns for both fees was $217,680.
Resident Doug Newell questioned why the town wasn't maximizing its bargaining power, adding that rather than paying a fair share of Derry's costs, the town is in essence giving away services to Auburn and Chester that they'd otherwise have to pay a premium for.

“Why don't we put a 1 in front of that ($47,250) just to get started. Auburn has a tax rate of about half of ours. Let's get them to pay their fair share. And not only there, but we ought to be asking Pinkerton for a contribution in lieu of the fact that we provide fire and ambulance for Pinkerton kids because a bunch of them are coming from Auburn, Chester and Hampstead, and the taxpayers in Derry are picking up the tab,” Newell said.

Hemeon said while it may have been possible to up the fee to Auburn and Chester, he feels the net 15 percent increase over the three-year contract was positive in this economy.
“These towns wanted to negotiate with Derry in good faith, but as we negotiate these contracts, I think we're bringing in good revenues,” Hemeon said. “It's a win.”

After several questions were raised about how much Auburn or Chester would have to pay for private service, and how best to calculate a fair percentage of cost, the council decided to hold off on voting until the next council meeting.

“The idea that we could be making a fortune by upping the price of our services is not realistic. For 20 years, it's really been a matter of one town helping the other, and I think the majority of councilors saw that, too,” Hemeon said, after the meeting.