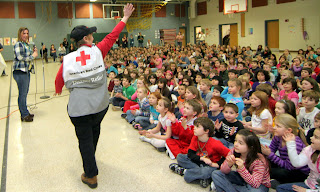 Kathy Jerome of the Manchester Chapter of American Red Cross greets Derry Village Elementary students during an assembly Friday.
By CAROL ROBIDOUX
Union Leader Correspondent
DERRY – Every so often there are lessons learned inside the classroom with lasting value, beyond a student's ability to read, write or calculate the percentage of children being left behind.
When fifth-grade teacher Joanne Duncan heard about the devastation in Haiti following the January earthquake, she had the urge to do something. 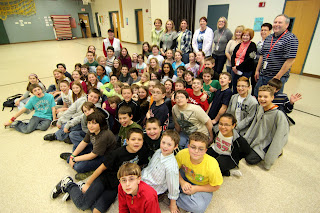 Derry Village School fifth graders and teachers strike a pose.
“Naturally, as a teacher, this led me to my students. Fifth grade is the perfect age to tap into their sense of citizenship and compassion,” said Duncan.
A four-week Spare Change for Haiti campaign was launched. While coin collecting in schools for worthy causes is not uncommon, Duncan felt the students would be able to truly relate to the need by understanding how different life for children in Haiti was, even before the earthquake.
She enlisted the help of school staff member Kristina Hunter, who had been to Haiti twice in 2009, doing mission work with a group called Doorway to Peace, a Boston faith-based organization.
“How many of you lost power during the storm last week?” Hunter asked the 400 elementary students huddled together on the gymnasium floor. Hands shot up into the air as far as the eye could see.      “Well, that's how it is for most people in Haiti all the time. They never have power, they don't get water from a sink. They don't have telephones. If you are a boy or girl in Haiti, you might have to walk a mile every day to get a bucket of water for your family,” Hunter said.      “A lot of boys and girls there only eat one time a day. They don't get their food from the grocery store. They pick it from the field or from the trees, or maybe a neighbor cooking on the side of the road will offer them something,” Hunter said. “They have fresh bananas and coconuts and almonds falling from the trees. It's a different life. Since the earthquake, the cost of food has gone up because it's harder to get.”      For every child at Derry Village School who dropped his ice cream money into the donation box, a hungry child in Haiti had rice for another day, said Hunter.      Each fifth-grade class sponsored a younger grade and was responsible for daily coin     collection duties, giving up recesses to count and recount, and record the information in a “checkbook”. Each week Kathy Jerome of the Manchester Chapter of the American Red Cross stopped by to pick up what had been collected, get to know the students and encourage them in their efforts.     "We didn't offer a pizza party to the grade that collected the most, or any other kind of incentive. We just wanted to organize something that would get the students working together as a community with a common goal,” said Duncan.      Having older students serve as role models and mentors created a different sort of hierarchy – upperclassmen who have earned their place at the top of the heap were working side-by-side with younger students for a common cause, teaching by example how to make a difference with a simple yet generous gesture.      Lisa Michaud, executive director of the Manchester Red Cross chapter, attended a special   assembly Friday to accept a handmade “check” which was used to announce the final figure to the student body – $1,897.97. They reacted with gasps, cheers and applause.      “Because of what you've done here, there is a boy or girl sleeping in a tent tonight with a warm blanket, a pillow and a hot meal. It's amazing for me to see young people who realize there are children just like them, living someplace else, who are in need,” Michaud said.      She explained that the Red Cross is a humanitarian organization, a big word that they had so beautifully defined with their actions.      “That means we care about every human being. Whether we are ever going to meet the people we help doesn't much matter. It's doing the right thing that matters. By your actions you've changed the lives of people in Haiti. Not many can say that they've changed someone's life today, but you did, and for that I want to thank you,” Michaud said.