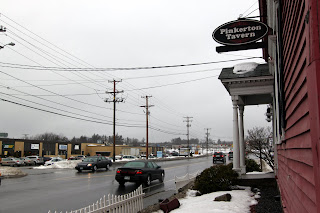 By CAROL ROBIDOUX
Union Leader Correspondent
DERRY – Momentum to “save” the Pinkerton Tavern has gathered steam in the months since it was formally announced that the popular restaurant was likely to be razed to make way for the widening of Route 28.
So far the process is mired in complexities, but may get a boost from state-funded relocation program.
One complication is that the building and lot are owned by Arnold Goldstein of Bedford, while the business is owned by husband-and-wife restaurateurs Jen Lutzen and Guy Streitburger, who still have a dozen years left on their 20-year lease.
Once the TIF District project was defined and approved by the council, the town sent offers for land acquisitions to17 property owners along that stretch of highway. Lutzen and Streitburger are not included because they aren't the physical property owners.
For the record, only three of the 17 property owners have officially accepted the town's offer.
Yesterday, Goldstein said he's satisfied with the appraisal on his property, which would drive the town's offer, a figure that has not been publicly announced. However, the current assessed value of the property, including the building, is $627,300.
“Relocating Jennifer and Guy is more important than working out issues with me,” Goldstein said. 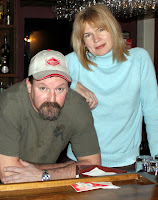 Streitburger and Lutzen
The town landmark has been damaged by fire over the years, but retains enough sentimental and historic value to have the support of the town's Heritage Commission in trying to leverage a deal to save the structure.
Town officials are seeking the best solution, one that would retain the Pinkerton Tavern as a local eatery. But the amount of land in front of the inn needed for the highway project would require moving the tavern 30 to 40 feet. While the physical move is not an impossible mission, wetlands behind the building prevents that.
On Friday, Town Administrator Gary Stenhouse said the town has through its economic development arm, contacted a relocation specialist and is exploring three possible options – reopening the restaurant with reduced parking on the same site, relocating the building to another nearby lot or reestablishing the business at an entirely new location in a different venue.
“I've authorized the Arnett Group to retain some experts – we want to do this with an independent set of eyes,” Stenhouse said. “We're trying to do the right thing. Part of our problem is ignorance. We had forgotten about the Uniform Relocation Reimbursement Act. New Hampshire law is pretty much copied right from the federal law, all according to a formula.”
Under the URRA, homeowners and businesses can qualify for compensation from state and local government programs that include help relocating and losses of net income up to a maximum of $10,000.
Dave Allen Motors, located next to the Pinkerton Tavern, is also slated to lose a chunk of real estate in to the widening project. Allen said yesterday he is among those property owners that have not yet responded to the town's offer.
“Honestly, I'm in limbo. I won't know what I will do until I find out what's happening with the Pinkerton,” Allen said. “For example, if they move that building, it would be a much better alternative for my driveway than the one they have proposed.”
Allen also has offered a one-acre buildable lot that sits behind his business as an alternative location for the tavern, an option he's mentioned to both the town and to Lutzen and Streitburger.
“I have put it out there. I called (Town Public Works Director) Mike Fowler on Friday to remind him, and I think they have some engineers looking at it. But no one has said, 'Hey, great idea; we'll take you up on that.' So for now, I don't know what I'm going to do,” Allen said.
“Everyone wants something to happen, but I don't know what's going to happen. I think it's further along than exit 4A,” said Allen, with a laugh. “The town claims they're ready to go to work in July on the project, but I don't see how.”
Stenhouse said optimistically, the widening project would still be on target for the end of the summer, given the need to resolve the Pinkerton issue and settle up with the other 13 businesses involved. He speculated that the other businesses may simply be exercising their right to an independent appraisal, under state law.
“If they think they can get more money, as a business deal, why shouldn't they try? If their appraisals come in lower, then that will be up to the Board of Land and Tax Appeals to decide. Some may settle before we get to eminent domain. Regardless, we're on top of the situation, and once we get all this together, we will sit with the council and decide on the best option, including financial options,” Stenhouse said. “We will know the answers within four weeks.”