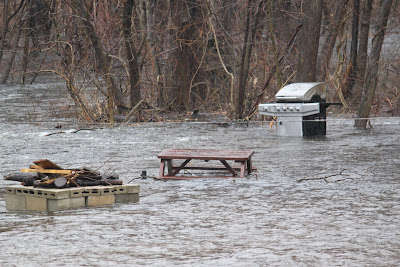 Brook Street resident Amy Beaulieu's side yard was swallowed up by rain-swollen Beaver brook.
CAROL ROBIDOUX
Union Leader Correspondent
DERRY – Waterways already swollen with snow melt reached their tipping points yesterday, spilling over onto roads and saturating flood-prone areas of town.
As a result of impassible roads in adjoining towns, Pinkerton Academy was closed yesterday, mainly due to flooding on Route 102 in Chester, said school spokesman Robin Perrin. Buses and parents were not able to get Chester students to the regional high school. 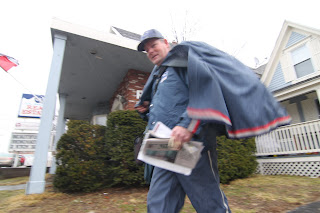 While most main roads were clear, side streets were puddling up depending on location. Cars sped through the deepening puddle on North Shore Road from water rushing downhill and crossing over into Beaver Lake, extending the water level up over the bank and back onto the road.
Derry fire officials said there were several trouble spots in town. Roads accumulating standing water were reduced to one lane, and a handful of roads were closed as of last night, including: Wind ham Road at Strawberry Hill; North Shore Road near #105; Franklin Street at Folsom Road; 41 Drew Road; and 74 Chester Road.
Hoodkroft Country Club looked more like a fowl weather water resort, attracting a flock of Canada geese on one side of the green, and some seagulls on the other.
A fleet of Comcast repair trucks were parked at the Hannaford supermarket around lunchtime, taking a break from restoring service to homes that lost power when the wind and rain began to kick up late Sunday night. Police fielded several calls for downed wires and trees, but no injuries were reported. 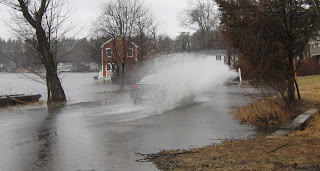 A car gets swallowed by a puddle on North Shore Road.
Fordway Road, which leads directly to the town's Dog Park, was closed just beyond the turnoff for the transfer station. One woman, with a disappointed-looking doberman in the back seat of her car, made a U-turn in front of the Road Closed sign and headed back toward the downtown.
Brook Street resident Amy Beaulieu was inside talking on her cell phone as the rain picked up around noon. She popped her head out to let her German shepherd get some fresh air, keeping one eye on the brook that runs alongside her home. The water was steadily rising and in the process of swallowing a picnic table and gas grill.
“It never comes up to the house,” she said, glancing at the rushing water. “Well, it hasn't, yet.”