Rotarians holding a dinner to honor vets May 27. 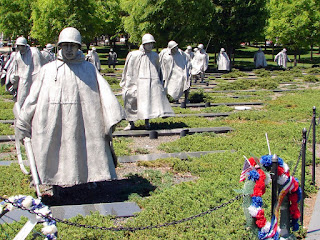 Korean War Memorial in Washington, D.C.
By CAROL ROBIDOUX
Union Leader Correspondent
DERRY – This Memorial Day the members of Derry's two Rotary organizations – Derry Village Rotary and Derry Rotary – would like to honor those who served during the “Forgotten War” era, the Korean War, which lasted from 1950 to 1953.
Because it falls chronologically between WWII and Vietnam, its significance has not always been as widely discussed, but the losses to American troops were significant – 36,516 dead,
92,134 wounded, 8,176 listed MIA and 7,245 POWs.
A dinner with all the trimmings is planned for May 27 at the Greater Derry Boys & Girls Club on East Derry Road. Before invitations can go out, organizers would like to make every effort to find every Korean War era veteran from the Derry area who would like to attend.
“It's our way of doing something nice for them,” said Eddie Leon, Derry Rotary member and chair of the Veterans Memorial Committee.
"Last year we paid a special tribute to our WWII veterans by flying about 20 of them to Washington, D.C., to visit the WWII memorial. This year, we wanted to honor Korean War vets in some way, but there are many more of them. We just couldn't swing it,” Leon.
Although the once-in-a-lifetime trip to D.C. was made possible through the efforts and generosity of many local businesses and individuals, it took a lot of coordination, and cost the Rotarians about $13,000.
Only 30 Derry Korean War veterans have been identified so far through various contacts, including the VFW. But Leon said there are plenty more who may not be affiliated with any veterans organizations who should be included.
Maj. Gen William N. Reddel III., NH Adjutant General, will be keynote speaker, and entertainment will be part of the recognition dinner, for which organizers are pulling out all the stops.

“We have Rachel's Catering out of Manchester to do the food, and we're going to use real china and silverware,” Leon said. “We're hoping for a good turnout.”
Any local Korean War era veterans currently living in Derry, or who have lived in Derry and would like to attend should contact Leon at 674-8144, or send an e-mail request to: heriberto83@yahoo.com. Transportation will be available on request.