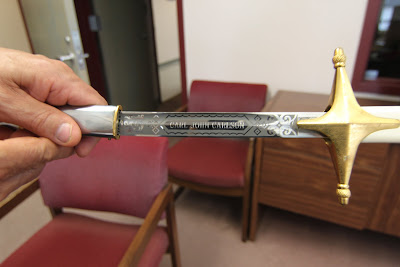 After 35 years, a Marine and a symbol of his service are about to be reunited.
By CAROL ROBIDOUX
Union Leader Correspondent
DERRY – What began as the case of the stolen military sword 35 years ago will forever be remembered now as the case of the missing “s” – a case finally solved after an extensive Internet search and one little letter provided the break in what could be the longest-running unsolved mystery in police department history.
More than 35 years ago, Derry Police Chief Edward Garone was intrigued by an interesting piece of evidence gathered during a routine bust at a Derry apartment complex. It was a beautiful gold-plated Marine officer's sword. None of the guys arrested could explain how it got there.
“I took personal possession of the sword. Being a former Marine, I knew its significance and value,” said Garone. 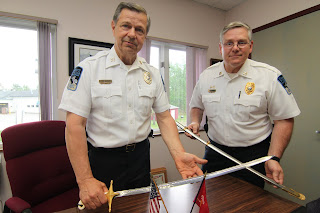 Garone, left, and Feole with the sword.
Had it gone into the evidence room, it would have been cut, torched and destroyed as a matter of course, like all unclaimed weapons. Initial attempts to find the rightful owner of the sword were made, based on one identifying piece of information: The blade of the sword bore the name “Carl John Carlson.”
“We tried following every lead possible, but could never find a match,” Garone said.
In the 1990s, Garone revived his efforts, asking one of his top detectives, former Army officer Dave Boyce, to see if he could find a lead. That ended in another dead end, this time, when Boyce got as far as the National Personnel Records Center archives in St. Louis, Mo., where the lid on personnel records is kept pretty tight.
Over the 35 years that the sword languished in Garone's office closet, the chief would occasionally take out the sword, pulling the blade from the sheath and looking at the carefully etched name, speculating about who this Carlson guy was, and how his sword ended up in the hands of small time criminals.
“I always did envision this sword could have well been through hell. At the least, I figured there had to be a good story there,” Garone said.
There was.
Fast forward to a few weeks ago, when Derry Police Capt. George Feole decided it was time to put his own curiosity over the sword's back story to work. He asked Garone if he could take a stab at solving the mystery, and began researching the sword on the Internet. He found that it was standard Marine officer issue, and had been for decades. The serial number on the weapon was not attached to a specific person, but rather identified its manufacturer, NS Meyer company of New York, which went out of business in the 1990s.
Feole followed that lead to a company called Vanguard, which purchased all Meyer Co. assets. Someone at Vanguard gave Feole his first hot tip.
“She said we might want to place an ad in Leatherneck Magazine,” said Feole, who promptly contacted the magazine's editor, Walt Ford.
“Our magazine provides a service called 'Mail Call,' which we use to help vets reconnect. Being a monthly magazine, we told Capt. Feole we'd run the ad. But rather than wait two months till our next edition, I said I would also like to send out an inquiry on a Metroplex Marines e-mail list, which goes out to active and retired Marines. I warned him that he'd probably get e-mails out the gum stump,” said Ford. 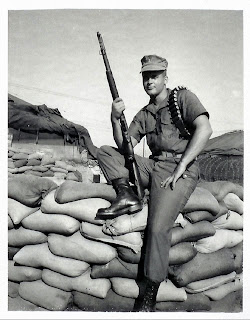 Carlsson, while serving in Vietnam in 1966.
One of those contacted through the e-mail blast was Rick Cleland, of Dallas. He recognized the name Carl John Carlson, with a significant twist.
“I had roomed with a Carl Carlsson at Quantico, where we went through training, in 1965-66, but he spelled his last name with two s's,” said Cleland. His gut told him it had to be the right guy. He left a message on Feole's voice mail on a Saturday, and in the meantime, tracked down Carlsson through some old classmates, who surfaced a week ago.
“It's a simple story, really,” said Carlsson. “They couldn't find me because I'd changed my name. Like a lot of people whose families came here from other parts of the world, my father's family was Carlsson from Sweden. At Ellis Island, they dropped an 's.' Once I became an officer, I asked about going to court and changing it back. That was about 1969.”
He lost track of the sword when, in 1970, he lent it to a fellow Marine from the New England area, who wanted to borrow it for a wedding ceremony.
“After that, I was deployed to Japan. When I came back, I'd heard the guy who borrowed it committed suicide, suffering from PTSD. You know, you never keep track of where people are from. All we know is if you come back from a tour, you're lucky. It's not like in the novels. If you don't come back in a box, that's good news,” Carlsson said.
He took it as a loss, eventually replacing the sword. The second sword wasn't meant to be, either.
“I lost it in a house fire, along with all my uniforms – actually I lost everything in that fire,” Carlsson said. “Of all the things in life I've lost track of, this is the only thing that's reappeared – like pulling Excalibur from a rock. It's amazing.”
Garone and Feole said they were overwhelmed by the incredible response by phone and e-mail from Marines all around the country – including Hawaii, all determined to find the sword's rightful owner.
Currently, they are working out details of getting the sword to Carlsson at his Florida home.
“After all these years, and all that it took us to finally find Maj. Carlsson, it doesn't seem right to put it in a box and ship it down. We'd like to find a way to have it hand delivered,” Garone said.
When he is finally reunited with his original sword, Carlsson said it will be the sole surviving relic of his past, and his proud service to his country.
Other than its 35 years in hibernation in Derry, and the circuitous route it took police to find him, Carlsson said the sword never saw any real action – except for one time, when he took it to Washington, D.C., in the mid-1960s to have it engraved. 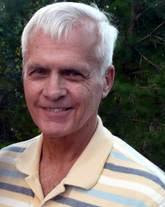 Carlsson today.
“I got mugged on my way there – it was in a pretty rough part of town on 9th Street. These three guys with knives tried to rob me. I pulled out the sword, and they ran off,” Carlsson said. “That's the only combat it's seen.”
He said his younger daughter will inherit the replacement sword, while his eldest has already staked a claim on the original.
If his sword had to be somewhere, Carlsson said, it's fitting that it found a safe haven in New England.
“As someone with a great interest in genealogy and family history, it's interesting to note that I've learned I have family who were founders of Yale, signators of the Declaration of Independence, and founders of New England, arriving on the Mayflower,” Carlsson said. “It will be good to have it back.”