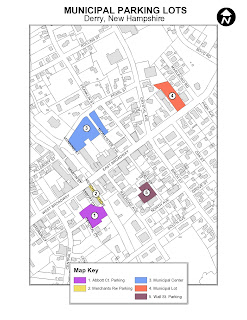 Would centralized parking help boost economic development?
By CAROL ROBIDOUX
Union Leader Correspondent
DERRY – Parking and economic development are like the chicken and the egg: it's hard to say for sure which comes first.
But the Downtown Committee is going to try to nail that down by forming a subcommittee to assess how much parking exists versus how much parking is needed during those perfect storms of activity, when the downtown is a draw for diners, show patrons, Gerrish Center activities and post-dinner bar grazers.
Then, there is the larger question, of whether the downtown's lack of centralized parking is a deterrent to current and future economic development. But building a new lot or parking garage would be a major financial and logistical undertaking, one that likely needs to be in the master plan before it could be funded, said Michael Gendron, chairman of the Downtown Committee.
In the meantime, we asked Public Works Director Mike Fowler for an estimate of designated downtown parking, and he dusted off a map locating the town's five municipal lots which collectively provide about 300 parking spaces within a half-mile radius.
Checking out the lots is an easy enough assignment, a circuit tour by car that takes about five minutes, but is easily walkable. Starting with the 66 spaces at Abbott Court, just a block from The Halligan Tavern and the Adam's Memorial Opera House, and two blocks from the Marion Gerrish Center, you can then drive one street east, to the 15 spaces at Merchant's Row, next to the Depot Square Steakhouse. From there, it's a a quick left and a right to the 100-space Municipal Center lot.

If you take the scenic route, you can head down Pearl Street and turn right onto Crystal Avenue, then left at the light back onto Broadway, and make a left after the Fairpoint building into the 47-space municipal lot next to the Masonic Temple.
It is the fifth lot, Wall Street Parking, that may be the town's best kept secret. There is minimal signage visible on Broadway. However, if you follow the signs for Mary Anne's Diner parking, and then keep going on Wall Street, there is a big empty lot to your right. There is no sign announcing the lot, but it is 40 wide open spaces nestled between the VFW and an auto body shop.
That puts four of the five lots where the concentration of night life is, west of Crystal Avenue. Lots 1 and 5 are only two-tenths of a mile apart – or a four minute walk, which brings Fowler to one of his talking points on parking.
“The employee parking lot, behind the municipal center on McAllister Avenue, is only 200-feet from Broadway. It may seem far from Halligan's, if that's the target, but an argument I make is that people who go to Portsmouth or Manchester don't expect to park next to the restaurant they're going to,” Fowler said. “In fairness, those cities do have parking garages.”
Another talking point is whether the signs are actually eye-catching enough.
“In 2001 when the town did a program to take down overhead wires and lights, the signage was selected and some feel it is not very effective in pointing people to town parking lots,” said Fowler of the white 24-by-36 signs that hang on light poles featuring the work “Parking” with an oversized “P” and green arrow.
“It had been suggested that we pick a different color, coral or red, or something that would stand out. But a white background with green or green with white is typical standard issue for parking signs,” Fowler said.
Fowler mentions a bonus lot – Lot 6, which will be added to the map in August, when 19 spaces, currently under construction at the corner of Birch and Broadway, are completed.
If you add in the two dozen or so two-hour horizontal spaces that line Broadway, by the end of summer prime time parking will peak somewhere beyond 310 parking spaces.
On the down side, it's New Hampshire, where winter happens. A nice five-block stroll in sub-zero temperatures dodging snow piles and icy sidewalks is no way to start a fun night out, which is why advocates of a centralized parking area continue to press for consideration.
Gendron said he is going to set a date and put parking on the agenda, where all ideas – from better signage and “where to park kiosks” to a full-on parking garage will be open for discussion. Anyone interested in getting in on the conversation should contact Gendron at michael.gendron@comcast.net.