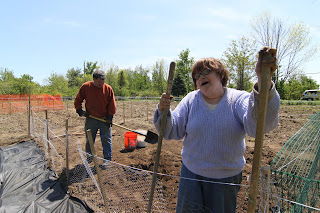 Jack and Lynne Goterch tending their garden.
Jack Goterch prepares the soil in his plot.
"I believe if you understand nature, you understand life. You gotta pull the weeds and prune if you want to have a fruitful garden.”  Lynne Goterch
By CAROL ROBIDOUX
Union Leader Correspondent
DERRY – Good fences do make good neighbors – if you're tending garden in a community plot, and keeping out pests is important to the preservation of your pumpkins and peppers.
Not quite the interpretation Robert Frost had in mind when he penned “The Mending Wall,” a cautionary tale about boundaries and neighborliness. But poetry and planting go hand in hand for Lynne Goterch, who appreciates her two plot neighbors and their chicken wire; now she only has to worry about fencing two sides of her garden.
On one side she is gardening next to her actual neighbor, Barbara Estabrook, who invited Lynne and Jack Goterch to sign up for a community garden plot with her this year. They are all newbies to the community gardens at Broadview Farm on Young Road.
“I got an e-mail Friday that the plot assignments were made and that they would be staked out Saturday. I came yesterday to find my spot,” said Estabrook, who has a corner plot.
Once again, demand for the 10 x 20 garden plots was such that the Conservation Commission squeezed in four more plots – there are 46 gardens this year divided among 34 gardeners said Peg Kinsella, who coordinates the program which is free to residents. All the plots are spoken for except for one raised plot, which would be good for someone who has trouble bending down, Kinsella said.

Estabrook , a Philadelphia transplant, moved in with her mother on Frost Road three years ago, but has known the Goterchs for as long as her mother has lived there, some 30 years. 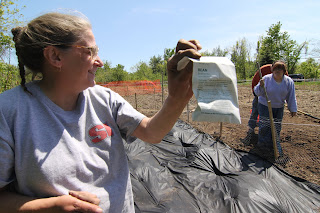 Barbara Estabrook with her Beananaza seeds.
“My mom has a small garden, but she gives everything away to the nuns in Manchester,” said Estabrook.
“Barbara is going to heaven. I'm hoping to catch a ride with her on her way up,” said Lynn Goterch, who has time on her hands, now that she's retired, to nurture some organic produce. Yesterday she helped her husband sift rocks from the dirt with her rake and pull weeds from the corners of their garden with her bare hands.
While her husband heaves the rocks into the woods, Lynn Goterch leans on her rake, her hands crusted down to the fingernails with garden dirt. “I never wear gloves. I like to get my hands right in there, and break a few nails,” she said, taking a break to talk about her philosophy of life, which is a lot like her philosophy of gardening. 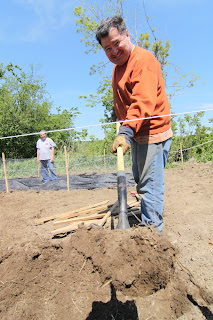 “The woods are lovely, dark and deep,” she says ominously, her inner poet stirring as she quotes some Robert Frost, her favorite. No coincidence, said her husband, that they moved to a house on Frost Road.
“I really am a Frost freak. I hated the house, but it was on Frost Road, and there were these beautiful birch trees in the back,” she said.
The Goterchs and Estabrook will be using their communal spaces mostly for large produce, like pumpkin and Hubbard squash, but they will nurture some pole beans and tomatoes, along with their inner gardeners.
“I love to weed and pick the vegetables,” said Lynne Goterch, stopping again to lean again on the end of her rake as her husband shovels dirt across the plot. “The thing I love about Robert Frost is that he was unpolished. Even though he dwelled in those dark places sometimes, and suffered a lot in life, he found beauty in nature. I believe if you understand nature, you understand life. You gotta pull the weeds and prune if you want to have a fruitful garden.”