'Good Enough to Make You Cry' 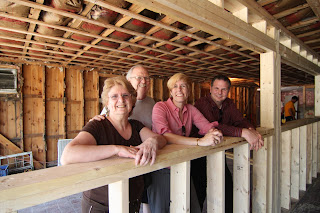 How's Your Onion, a new eatery coming to an old superette near you...
By CAROL ROBIDOUX
Union Leader Correspondent
DERRY – After 26 years in the corner store business, Doug and Roz Hartley called it quits. They sold everything from the dusty shelves of their little family-run JP's Superette a few months ago, turned out the lights and considered the future. 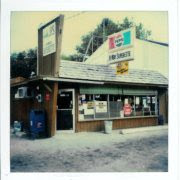 “Things changed in the 26 years since we bought the place,” said Roz Hartley. “Back then, Londonderry was farms, there were only nine stores in town, and were were a full fledged grocery store. People came here for everything.”
She said buying the store was a dream fulfilled, but not without calculated risk of failure.

“Everything we owned, we hocked. Even our furniture and our clothes were up for collateral,” she said.”We kept the name that was already on the sign because we couldn't afford to buy a new one. We never changed it.”

But things in town continued to change – the population boomed, and so did the competition – diners, drugstores, convenience stores, grocery chains. There were plenty of other places to buy smokes and beer and lottery tickets, and it took its toll. The last few years were a struggle, said Janna Hartley, who grew up working inside her parents' store along with her brother for a dollar an hour.
She said her dad eventually took on part time work at the Manchester Boston Regional Airport working nights, which helped make ends meet and provided health insurance. He has since gone full time. 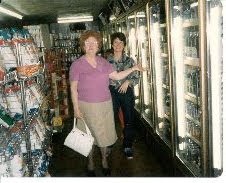 “We weren't just surviving; we were losing money,” said Janna Hartley. “Mom and Dad were considering what to do, whether to sell or rent to someone. That's when my brother said he wanted to try running a restaurant. He'd been working in restaurants his whole life, and if he was going to be working 90 hours a week some place, he might as well be doing it for himself. The timing seemed right.”
That was the beginning of what they hope is about to become the next big thing, the family business, once removed. Instead of selling groceries, Marc-Damian Hartley will be using groceries to cook up his specialty breakfast and lunch dishes inside the completely renovated space with the intriguing name: How's Your Onion?
He's hoping the restaurant, and it's unusual name catch on with returning superette customers, and draws the epicurious from outside of Derry, looking for a new favorite spot.
Family is what it's all about, said Marc-Damien Hartley, who learned everything he knows about the state of one's onion – and the love of a good breakfast – from his grandparents, Rose and Alfio Giuffrida. 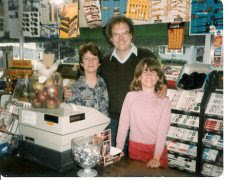 He explains that his grandfather used to pose the question, “How's your onion?” to all the grand kids, who were taught the correct answer was: “Good enough to make you cry.”
“That was his greeting – everyone knew the answer. Maybe it's an Italian thing. I don't know, but it makes you think. As soon as I thought about it, I knew that was what I was going to name the restaurant. I'm dedicating this place to his memory,” he said.
He credits his grandmother for teaching him the value of a good, hearty, basic breakfast – something that will be a mainstay of his business.
The Hartleys are also dedicating the place to all things New Hampshire in hopes of attracting seasonal tourists – there will be an homage to astronaut Alan Shepard, a moonscape which Roz Hartley will be painting, and other references to local heroes and hallmarks. Town historian Rick Holmes helped them discover the state tartan, a lively plaid that will be featured in the décor, and that goes well with onions.
Janna Hartley is working on social networking, launching a Facebook page, perfecting the menu design and starting a local buzz.
Her mother, who for years put her passion for painting on hold, is going to be networking with local craftsmen and artists, hoping to bring some homegrown talent into the mix.
“I want to bring in local artisans, maybe have rotating art exhibitions of work for sale. Even though this is Marc's baby, Doug and I will be in the wings, helping out,” said Roz Hartley.
“Actually, I always wanted a place where I could get a free breakfast,” said her husband. “I can't wait for the place to open.”
On the web: www.howsyouronion.com