It's the Stuff Dreams are Made Of 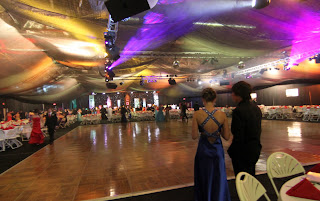 By CAROL ROBIDOUX
Union Leader Correspondent
DERRY -- Building a better prom at Pinkerton Academy means a year's worth of effort and elbow grease. Junior class advisor Jen Brown guides the process. Junior Prom is The Event. The sophomore semi and senior banquet are equally significant in the scheme of things, but there is only one prom.

“It's an elaborate fantasy. The kids are up for quite an evening,” said Brown, who knows of what she speaks. As a 1997 Pinkerton grad, she was on her own prom committee and vividly remembers the “Dancing in the Moonlight” themed soiree, a moment in time when the only thing bigger than the prom itself might have been the hair.

Friday afternoon, junior class officers Cody Diehl and Sydney Germaine are pulling it all together. They can hardly contain the excitement they're feeling, busting into occasional dance moves every time the sound system is tested.
“You start dreaming about it when you're in elementary school, because you know eventually it's going to be your turn,” said Sydney, after testing her moves on the faux asphalt with Cody. “This is the big event, the one you'll remember.”