Councilor ready to get out of town, politics

KEVIN COYLE  WILL STEP DOWN, MOVE ON, ONCE HE SELLS HIS HOUSE.
CAROL ROBIDOUX
Union Leader Correspondent
DERRY – Councilor Kevin Coyle figured it was just a matter of time before word got around that he is selling his North Shore Road home and getting out of town – and politics.
“We've purchased a home in Londonderry that we're in the process of restoring and renovating, and when the house in Derrry sells we will be moving,” said Coyle. 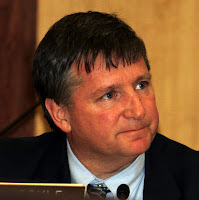 “It's something we've thought long and hard about. I can't say politics has not played a role in our decision, because it has. I will serve out my term as long as I can, but Derry politics has been frustrating for me. As I've experienced it, local politics is mean and nasty, down and dirty, and people are just not nice,” said Coyle. “I'm sure there will be people who are thrilled when I'm gone.”
Coyle was elected to the Council in 2006, running on a platform of political change in a town where he has lived most of his life. Fellow Councilor Janet Fairbanks has been his only consistent political ally. Since the March elections, both Coyle and Fairbanks have expressed a growing frustration over their lack of relevance, as most voting matters wind up 5 to 2, with few exceptions. Their terms do not expire until 2012.
On April 1, Coyle and Fairbanks filed a lawsuit against the town after newly seated Council Chair Brad Benson called for a non-public meeting to discuss hiring a firm to search for a new town administrator.
“When I had to sue the town council because they were violating the law, they made it pretty clear they are going to do whatever the hell they want,” Coyle said.
Benson has said publicly that he is trying to bring civility back to the Council, and has expressed his interest in mending political fractures among the board.
"My goal is to move the town forward. My goal is to make good decisions and not have personal attacks and to be fair and honest. Kevin indicated he objected to the nonpublic meeting. I verified to the best of my capabilities whether we could have a nonpublic meeting. Kevin respectfully disagreed, and we moved on," Benson said at the time the suit was filed.

Because Coiyle works as a solicitor for the town of Londonderry, he's prohibited from holding office there, which suits him fine. He said he is sorry to disappoint those who voted for him, but should he resign his seat, he plans to request that Tom Cardon become his replacement. Cardon ran in the last election, losing lin District 2 to David Milz by one vote.
“Tom has many of the same views I have, and I will ask that they respect my request, and the fact that he lost by only one vote,” Coyle said.