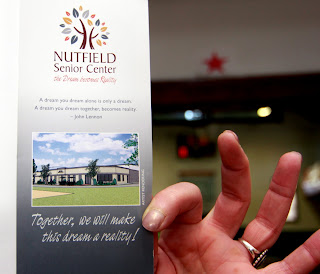 
DERRY – After eight years of germinating, a big idea is about to take root in Derry. A local senior-centered organization is moving full steam ahead with fundraising to build a first-of-its-kind activity center in East Derry by adding onto the existing Boys and Girls Club of Greater Derry.


“We're the fourth largest community in the state, and we have more than 2,100 seniors, yet we don't have a dedicated senior center,” said State Rep. Beverly Ferrante, R-Derry, a board member for the Nutfield Senior Center.

She said if all goes as planned, doors could open on the Nutfield Senior Center by fall.

Tonight's Council meeting agenda includes a request by Nutfield Senior Center President John Moody on behalf of the center for $396,000 in town money toward the $1.2 million needed to complete the project. He is proposing a match-funding deal similar to the one extended to the Derry Rail Trail Alliance two years ago, which provided that the group raise matching funds before receiving money from the town.

“If we can get the town council to allocate the money, that will go an extraordinarily long way to get others to jump on board,” said Moody. “I'm optimistic that we can do this – not everyone who's talked to me bout it is. They say this isn't the time, or the economy is bad, or what have you. But we've been down that road before in our community, and I believe there are sometimes when it's got to be about what is the right thing to do.”

He said the town has a healthy capital reserve fund from which it could set aside the money for a project that will attach the 5,000-square-foot addition onto the existing 30,000-square-foot Boys and Girls club, resulting in a reconfigured 35,000-square-foot community center at a fraction of the cost.

“They don't need to do anything other than leave the money there until we raise an equal amount. If we aren't successful, their money is not at risk. To me, it's a no-brainer,” Moody said yesterday.

The group has already received a $396,000 non-construction federal grant with the help of Sen. Judd Gregg, which can be used for furnishing the new center and other programming expenses.

Supporters of the endeavor spent the weekend distributing information to residents during the town's annual Frost Fest, officially launching the community fundraising push, Ferrante said. Brochures have been mailed and checks are starting to trickle in.


“Sometimes, in a down economy, you find people for whatever reason are more inclined to give. I have already gotten $50 checks from some seniors, which is fantastic,” Moody said.

Late last year the group announced its plans to collaborate with the Boys and Girls Club of Greater Derry to solve the problem of finding a home for a senior center. Current programming for seniors has all but outgrown the Marion Gerrish Center across town, which provides space for more than 140 different organizations in addition to seniors.

“We had done a lot of research, and looked at 10 other senior facilities, in New Hampshire, Massachusetts and Connecticut. We wanted to see what was going on in senior citizen land, and we found out that it's a changing landscape,” Ferrante said.

Although Moody has been the driving force behind the project, it was someone else who gave the project its wings.

About a year ago, Derry Chief of Police Ed Garone, a 35-year member of the Boys and Girls Club board of directors, had a brainstorm: Instead of starting from scratch, what if there were a way to build the senior center as an addition to the existing Boys and Girls club building, which is already fully equipped with a kitchen, a gym and plenty of turf?

“My wife and I are grandparents, and we enjoy our three grandchildren very much. It just seemed to me that there may be a way to create some melding between the two age groups that would be advantageous for both,” Garone said. “There are a lot of kids with no grandparents, and a lot of grandparents with no grandkids around. I thought this might create an opportunity to service both segments of the population.”

Garone ran the idea past Moody, who was immediately on board. The idea was also an easy sell to Boys and Girls Club director Art McLean, who was intrigued by the possibilities for breaking new ground, not just physically, but philosophically.


“Our board of directors voted over a year ago to make the offer to the senior citizens center, to allow them to build an addition to house the center here, and they've been working hard toward that goal for 12 months    now. Although their facility will run independent of the club, they will be able to use our building while the kids aren't here – which is great, because the building is under utilized during the day,” McLean said.

But this collaboration is really about the ways the newly configured community center can become an inter-generational hub for residents of all ages, he said, making it the first such collaboration nationally in Boys and Girls Club history.

“Most exciting is that by combining a youth organization with a senior organization, it opens up all kinds of possibilities for cross-programming,” McLean said.


Although the group is optimistic that the council will vote in favor of supporting the project following the public hearing set for March 2, they are prepared to see the project through no matter what happens, said Moody.


Garone has confidence in Moody's sense of confidence.

“In the person of John Moody we have someone with a lot of motivation behind him. Yes, it is a horrible time to be raising money. But I suppose if we waited for the perfect time we wouldn't get a whole lot done,” Garone said.


“If we can pull this off, I think it will be a trendsetter for many other clubs and senior citizen centers around the country, to take this lead and to try it themselves. It's a natural fit.” Garone said.