By CAROL ROBIDOUX
Union Leader Correspondent
DERRY – In the hours before longtime State Rep. George Katsakiores died Monday afternoon, he lay quietly in a VA hospice bed, his family gathered around him. His notorious gift of gab was gone, but Katsakiores clung to life long enough to share one more string of memories with his loved ones.
“It was a tape my daughter made in the fifth grade – she's 22 now,” said his step-dauughter, Laurie Albert. “I'm so glad I kept it. They had to interview their grandparents, and she had prepared five pages of questions for him. When we got the call in the morning, that his breathing was shallow, I grabbed a tape recorder and we all ran down there. We listened to him as he told her the stories of his life.”
Stories that captured what it was to be the son of Greek immigrants, growing up in a different Derry, one where factories set the pace and cow pastures monopolized the landscape. How he peddaled fruit with his father and built a porch swing out of orange crates, simply because he loved to swing.
One story, which she hadn't heard before, was how Katsakiores' mother was sent here from Greece at age 11 on a banana boat bound for Ellis Island, in search of her own American Dream, and how his father had been come to America in the same way, at the age of 13.
They met and fell in love, which set the course of Katsakiores' life – a series of adventures involving people and politics, which would begin and end with his passion and love for the town of Derry.
Born and raised in Derry, Katsakiores, 85, graduated from Pinkerton Academy as class president and valedictorian. He served as a medic during World War II, and graduated as valedictorian of his graduating class from UNH.
Those who knew and loved Katsakiores knew him primarily for his tireless commitment as a state representative – a role he took on after retiring as a sandwich shop owner in town.
“For 28 years we drove together to the State House – oh, how I'm gonna miss him. We had such fun together,” said his partner in politics and marriage, State Rep. Phyllis Katsakiores.
She recalled how they'd met, while working on a town budget committee together.

“Oh yes, I remember it well because I remember I kept hollering at the chairman of the committee to please make George Katsakiores stop talking – he had to comment on everything, or cut money out of everything. He grew on me. Over the years we used to look back and laugh about that,” Katsakiores said.
Politically aligned on most fronts, their alphabetical circumstances inside the State House dome allowed for some disagreements that went, largely, undetected by their peers.
“On social issues we were together – we believe you should give people what they need to live a decent life. But on a lot of other things, we argued. If he ever voted different from me – and it didn't happen often – but when it did, I would kick him in the shins and whisper, 'You can't vote that way.' He never changed his mind, though.”
Political colleague and friend, Sen. Bob Letourneau, said it was hard to see Katsakiores – always a strong and energetic man – go.
“George was a kind man and a good friend. You could call and discuss any issue with him, any time, and he would keep you in that discussion for a long, long time,” said Letourneau. “He was a highly intellectual man, but a soft-spoken guy and a gentleman. He wasn't the kind of guy who went flying off the handle. He'd always move the conversation forward with his thoughtful process.”
He said over the years they'd discussed Katsakiores' service during the war, of which he was proud.
“He was a military officer. If you yelled 'medic,' he was the guy who ran up and helped. He saw a lot of horror in World War II, but over the years he remained the guy who would run to help, no matter who called,” Letourneau said. 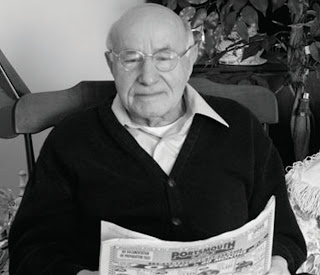 He was a man of many passions, said his wife – he loved vegetable gardening, soaking up sunshine in his backyard, traveling, mingling with good people, reading several daily newspapers, and sports.
“He was on that railroad commission – that was another passion of his. He wanted to bring the railroad back, and he worked hard to try and make that happen,” said Phyllis Katsakiores.
She said his passing is the end of an era for the town of Derry.
“I don't think he was ready to go. Spiritually, he was. But there was so much more to be done. We used to talk about that while he was in the hospital. I'd read him legislation that was coming up, and he would get upset because he wanted to be there,” his wife said.
The two loved to travel around the country, frequently accepting invitations to Washington, D.C., and the White House.
“He got to meet Ronald Reagan, who he idolized, and both Presidents Bush, Jack Kemp – it was like a who's who, the number of people we had the chance to not only meet, but sit with and have coffee with. It was truly amazing,” Phyllis Katsakiores said.
“He was a sweet man – other than he talked a lot. He was so well loved, and he loved the town of Derry,” she said. “We had a wonderful life together, a lot of adventures. I'm gonna miss him like crazy.”