Free Audiobooks at the library: In your ear 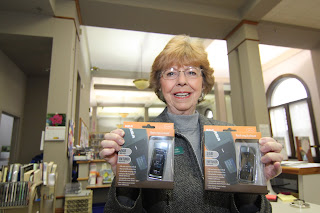 Maggie Lyons, circulation desk librarian at the Derry Public Library,
shows off MP3 players that will be raffled off next
month in an effort to encourage patrons to use the statewide Digital
Library Reserve system to download books onto their iPods and MP3
players as an alternative to checking out hard copies.
By CAROL ROBIDOUX
Union Leader Correspondent
DERRY – What sounds like a book, is invisible and moves from the nearest public library into your ear with the push of a button or two?
If you said any one of the thousands of digital audio book selections from the state's Overdrive Digital Library Reserve system, then you are one of the enlightened few.
“Statistics show people are using them. It's just a matter of getting the word out to our clients here in Derry that this wonderful resource is available,” said Diane Arrato Gavrish, the library's assistant director.
Gavrish said the statewide digital audio book system, while underutilized, is catching on – not only because of the growing popularity of iPods and MP3 players, but because it's a technology that's easy to tap into. Using your home computer or laptop, a library patron can search for and download a book onto their iPod or mp3 player to keep for a two-week loan period, without ever leaving home.
As a way of promoting its digital services, the library is giving away two MP3 players, an impromptu promotion that hopefully will get people talking about the future of digital literacy.
Or at least, about some really good books they've heard lately.
“It's a free raffle. Just come into the library over the next month and you can pick up a raffle ticket. People who find us on Facebook or Twitter can get a second ticket, if they mention that to us when they come in,” said Gavrish, who Tweets and Facebooks regularly to a modest but growing group of library followers.
Starting March 17, winning raffle tickets will be pulled and winners will be notified. Yes, it's a little gimmicky, but the Friends of the Derry Library felt it was a good way to get behind a trend that, nationally, is gaining momentum.
According to a recent study of library trends over the past decade published by the American Library Association, currently 22 percent of Americans visit their public library via computer – that's 51 million people. Offering a digital collection that is comprehensive and current is key.
In New Hampshire, it the push has been trickling down to local libraries from the state library, said Gavrish.
“For the State Library to be the forerunners in something like this is kind of interesting. They aren't always the ones to lead the charge when it comes to technology,” Gavrish said. “This is exciting, and it's something available from the smallest of libraries – from Danville to Derry.”
Meryle Zusman, Derry library's webmaster, said this particular trend underscores the relevance of libraries in a digital age.
“We have heard of some libraries getting Kindles and Sony Readers that patrons can actually borrow. For us, this is all just another way to continue our mission, which is not just to provide books for people who come into the library, but to get material that entertains, educates and enlightens into the hands – and ears if they prefer – of as many people as we can,” Zusman said.