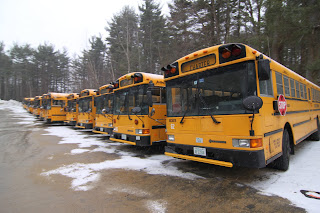 Buses around the state were left idle by yesterday's cancellations. Here, Derry's school are parked in a dusting of snow at 2 p.m., just when they would normally be dispatched for after school duty.
By CAROL ROBIDOUX
Union Leader Correspondent

DERRY – A perfect storm means different things to different people. Windham Middle School student Zoe Goldthwaite and her breakfast posse, still lingering over pancakes just before noon at Maryanne's Diner had one clear message for their school superintendent, Frank Bass: Bad call; good decision.
"At first, I was mad at the weatherman when I woke up and there was no snow," said Sean Fabian, 13.
"Yeah, me too. But now I think we should be thanking the superintendent," said Tim Erdlen, 14.
Bass and his fellow school superintendents across the state collectively closed more than 325 schools yesterday under clear skies based on radar projections from multiple weather tracking sources that showed snow blowing into southern parts of the state by 7 a.m., gaining steam by 1 p.m.
As it turned out, flurries sputtered throughout most of the morning and didn't even begin to stick until after 2 p.m. -- the time most schools start dismissing.
By the evening commute, the roads had turned treacherous, and accidents were reported all over the state's southern tier.
Making the call
Derry Cooperative School District Superintendent Mary Ellen Hannon was one of the first to call it a snow day. By yesterday at 3 p.m., as fat, sticky flakes were coming down fast, she was feeling good about her decision.
"I had one angry phone call today. Usually, it's more," said Hannon. "The caller thought we should have had early dismissal instead of canceling."
Superintendents across the board agree that early dismissals are, like stay-home moms, mostly a thing of the past.
Nashua district superintendent Mark Conrad said yesterday that erring on the side of caution is usually the best call, for students and parents.
"Once we get children into school, we don't like to have early release because, in some instances, you don't have parents at home. Or if you're in a situation where the traffic is going to be bad in the afternoon, and parents may be getting stuck somewhere in Massachusetts as they are scrambling to get home from work in time for their kids, that creates a whole other set of problems," Conrad said.
Another consideration for urban districts like Nashua and Manchester are the number of students who walk and must negotiate snow-covered sidewalks.
Conrad said morning delays and early dismissals create problems for teachers, who either have to truncate lesson plans or abandon them altogether when the school day is abbreviated.
Frustration at 1 p.m.
Manchester Superintendent Thomas J. Brennan was up a good hour before sunrise to check weather reports and make calls to colleagues.
"I think we all had the same idea," he said. "The frustration occurred around 1 o'clock that the weather wasn't coming as quickly as expected."
Brennan said districts aim to be conservative, to weigh all the variables of calling off school. It was Manchester's second snow day of the 2009-10 school year.
Londonderry Superintendent Nathan Greenberg said his day began the way every school superintendent's day begins when snow is on the radar.
"At about 4 a.m., you start to check. You go outside to see if there's anything happening. Then you check with the weather service and every other weather resource available. Then, you start checking in with other superintendents," Greenberg said.
Unless snow is falling, superintendents bypass the town highway department and check in with each other, swapping information they have each gathered from private meteorologists hired by their districts, or other weather services.
One call they don't make is to the state school department, said Lori Temple, spokesperson for the New Hampshire Department of Education.\     "Honestly, I couldn't even tell you which schools are closed today," she said yesterday morning.
Temple explained that the only state-mandated requirement schools have across the board is that a 10-day cushion be built into the 180-day school calendar to cover unforeseeable events like snow.
Snow envy
Derry Town Administrator Gary Stenhouse couldn't help but wonder out loud if the highly publicized storms that crippled the mid-Atlantic states recently might have contributed to yesterday's snow day decision-making -- compounded by the lack of snow days schools have logged so far.
"I don't know, it just makes you wonder," Stenhouse said.
National Weather Service meteorologist Eric Sinsabaugh was not ruling out regional snow envy as a contributing factor to yesterday's widespread school closings.
"I think your school people got some bad information from somewhere. The way we issue warnings is that we put it out there for the time the snow is going to begin. At 3 a.m. we issued a winter storm warning, from 9 a.m. Tuesday to 7 a.m. Wednesday morning. OK, looking back, that was probably a bit of overkill. But it looks like you are getting some pretty heavy snow right now," said Sinsabaugh, just before 3 p.m. "This is wet, greasy snow, the dangerous kind. You wouldn't want school buses out in this."
New Hampshire Union Leader reporter Dan Tuohy contributed to this story.