Turf Wars brewing over proposed conservation land.
By CAROL ROBIDOUX
Union Leader Correspondent
DERRY – Turf wars are brewing over how conservation land is purchased in town – and why.
It's classic East Side/West Side controversy in a town divided by more than geography. For years, the question of open space has been a sore spot that, with this newest dispute, has yet to heal.
Conservation Commission chair Margi Ives made a request at last week's regular council meeting to purchase a 132-acre two lot parcel for $240,000 using money from the town's conservation fund, land the town's been eyeing for more than a decade.
That is dirt, cheap – quite literally. The balance of the total purchase price paid to the sellers, Ben and Robert Lowe, would be paid by a supplemental grant from the Natural Resources Conservation Service – a “phenomenal deal” according to councilor Neil Wetherbee, a former commission member who now serves as council liaison to the board.
Commission member Paul Dionne spoke in favor of the deal, which would preserve some “ecologically rich” real estate that harbors wetlands, is occasional home to deer, moose and beaver, and which also hosts a well head – important to preserving the town's well water supply.
As a motion was made to close the public hearing, Council Chair Rick Metts interrupted, saying he had a written statement submitted by resident Maureen Rose, asserting that the town's open space policy is lopsided, and over recent years members of the Conservation Commission have gone after properties in their own neighborhoods for personal gain. 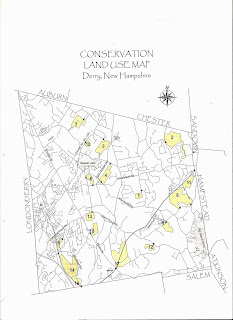 “There is no coincidence and the town council must stop these so-called coincidences,” wrote Rose, in part. No coincidence, said Rose, that current commission member Dennis Wiley is a direct abutter of the property in question.
Not only did Rose go on to name names – listing several past and current members of the volunteer board as “self-serving” – but went on to say that no effort is made to conserve land in the town's most densely populated areas, where it's most needed, and that council is just as guilty for allowing this practice to go on.
While Wetherbee admitted that it's no coincidence several of those involved with the commission live within walking distance of one another on the East side of town, he takes exception to Rose's allegations – as did Ives and Dionne.
“I'm not sure what Maureen Rose means by 'personal gain.' I do go to Hood Park and the Rail Trail and Cole Marsh, and enjoy all the town's conservation land. It belongs to every single resident of Derry. The land we protect comes directly from a list of properties that have been identified, not just by us, but by the state,” said Ives.
“The town of Derry has a Conservation Commission with one of the best reputations in the state. We are the fourth largest town in the state, in the Southern tier where land is rarely protected. We've come up with a criteria used over the last 15 or 16 years to rate land, not from the heart, but we do it from the head,” Dionne said.
However Councilor Janet Fairbanks, who campaigned on the lack of parity in open space distribution, said she agrees with Rose's assessment of the situation wholeheartedly.
“The Conservation Commission does everything she accuses them of. If they don't like being criticized for taking taxpayer money and enhancing their properties, then stop doing it; it's that simple,” Fairbanks said.
“Paul Dionne walks out his door, crosses his private road and within 300 feet he is in his own personal playground that taxpayers paid for. If he doesn't like walking out his front door, he can always go to the left and he can walk the J&F property the town bought the building rights to,” Fairbanks said. “He feels attacked? Guess what? We're affronted over here on the West side. We're affronted that this continues to go on and no one tells them to stop; just stop what you're doing and make this fair and equitable.”
If it sounds somewhat personal, it probably is, said Councilor Brent Carney.
“It's gotten overly personal, and frankly, the arguments over this land are the same arguments we have heard over every other property the Conservation Commission brings forth,” said Carney.
“I can understand people wanting to better their own community, but I would argue that anyone who lives anywhere in this town can get to a piece of conservation property, no matter where they live, within about a 10 minute walk,” Carney said.

“That said, there needs to be more green space downtown. That doesn't mean we should say no when something like this comes along,” Carney said. “I won't base my decision on where a commission member lives. If buying this land is in the best interest of Derry residents, no matter where they live, I will support it.”