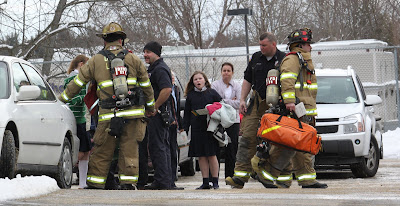 
DERRY – Fire officials have yet to figure out what sickened 23 students and a teacher at St. Thomas Aquinas school yesterday morning, after complaints of “flu like” symptoms sent all 23 to area hospitals.
Just before 11 a.m. emergency crews were called to the school by Principal Paul Rakiey, who became concerned after five eighth-grade students began to suffer from dizziness, nausea and headaches, including a student and teacher who passed out.
A fleet of emergency vehicles were lined up in the lot between the church and school, and rescuers swarmed the parking lot as panicked parents started arriving in waves, rushing toward an office building where all evacuated students were waiting.
After evaluating all those complaining of symptoms, 12 patients were taken to Parkland Medical Center, eight to Elliot Hospital, and one to Catholic Medical Center. They were transported by 10 ambulances and 1 school bus. Other students were taken by their parents to area hospitals for evaluation.
Although initial reports were that there may have been a gas leak at the school, Haggart said there were no positive readings coming up inside the building on gas meters being used to monitor carbon monoxide levels.
Most of the affected students were in third-floor classrooms in the eighth grade wing, said Rakiey. He noted that most of the students started to complain of feeling sick after attending Mass across the parking lot inside the church. However, at least one student felt ill before Mass started.
“It began with one of the eigth graders, who actually passed out while reading a book at the front of the classroom,” Rakiey said. A teacher who was among those treated, had also passed out before Mass, while in the office.
“I wondered at first if it was a flu outbreak. Then I had to wonder for a moment if it was an orchestrated hoax. But as more children became sick, I realized it could be something like carbon monoxide, so I called 911,” Rakiey said.
Haggart said the fire department was going to close up the building and allow the heating system to run, then return at 5 p.m. to check for CO levels.“We are doing everything we can to recreate the circumstances,” he said last night. Crews were going to continue to monitor the building at intervals overnight.
Shortly after the 5 p.m. air quality check, Haggart said meters still were showing 0 parts per million of the odorless gas.
Rakiey said last night that eight additional CO sensors had been purchased and installed in the building, supplementing one already installed in the basement. He said the heating system in the building was not the original one installed when the school was built in 1953, but he was not certain when it had last been replaced.
Evaluating the school's heater, and all processes that went into play in dealing with yesterday's emergency would be part of a follow-up session with the school board president and other officials.
Haggart said in considering other possible reasons for the widespread illness he questioned Rakiey about whether students had been exposed to incense during Mass. They had not.
“They did burn reeds for Ash Wednesday, but they did that the day before, and it was outdoors. I honestly can't imagine there would be any correlation there,” Rakiey said.
Haggart said his crews had not yet been able to rule out a “transient source” of noxious gas, such as a delivery truck that may have been emitting exhaust.
Haggart stressed that the level of CO registering in afffected students amounted to about half of the level of CO a smoker would have in his system.
“It's normal to some degree to have slight levels of carbon monoxide in the blood, and the levels we're finding are not terribly high,” Haggart said.
Susan Desrosiers said she wasn't too worried when she got the call from the school just after 11 a.m. that her son, Cole, an eighth grader, was feeling ill.
“Not until I got here and saw all the trucks,” she said. “Then I was concerned.” She had her son sit inside her SUV to see if he started feeling better.
“But when I checked on him, he was pale, and said he felt faint, so I rode with him in the ambulance to the hospital,” she said.
After treating her son with oxygen for a short time, his CO levels were down to 0 and he was released.    She said one of his classmates was still at the emergency room by 1 p.m., still showing eleveated levels of CO, even after an hour on oxygen.
As of last night, all students had been treated and released from the hospital, Rakiey said. Teachers were going to call all families last night, to make sure everyone was all right, he said.
Cindy McCarthy of Raymond was among those who had heard about the emergency and rushed to the school without knowing what to expect. She arrived just before noon to pick up her three grandchildren. She said her youngest grandson's CO levels were slightly elevated.
"We're gonna take him home. I think some deep breaths and he'll be OK," said McCarthy.
The school has an enrollment of 223 students in grades pre-K through 8. According to Lynn Kish, the school's director of development, school was back in session this morning.